How is Vampire Love Different From Human Love?! 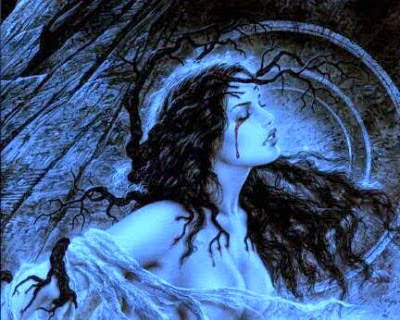 Vampires do not love each other as a rule, not in my fiction. They lust after one another, have wanton, unbridled, unrestrained sex with one another. And if they 'love' a human, it's going to be the same thing. There will be sex, lust and feeding!  Feeding is what vampires do. They might go to the opera, hang out in New Orleans or Paris, look very cosmopolitan, but they WILL feed! They will do this because they are not human. Unless a human being is in serious need of a forensic psychiatrist, they do not feed whilst having sex. Vampires do.

Question: How do I know if a vampire really loves someone or something?
Answer:   He or she does not drain the being that he or she is feeding on. Draining results in death! So, if the human is spared, the vampire loves them! There might not be a prom and a corsage, but there is vampire love.

Another difference, as I see it in my fiction, is vampires do all sorts of naughty, kinky things while feeding which is incorporated into the sex act. Oh yes, this can really get wild and does get wild in all my books.  The wildest sort of vampire sex is depicted in I, Bathory, Queen of Blood. Well, in human life, Erzsebet Bathory was a sexual predator and deviant, mass murderer who bathed in blood. That she did as a human being! So, what she gets up to as a vampire is wild and crazy. It would have to be, right, I mean in order to maintain the credibility of her character!


As a reviewer wrote about  justine: Into the Blood: "Bringing Vampires back to their roots of predators and not that of a lovable housemate!"

As I always say, they are complex beings, capable of love and when they feel that, it will blow your sox off because it is rare for them to feel that way as they are basically, demonic creatures with no soul. They are what they are. And since they aren't like us at all, they 'love' differently. There are other aspects to them which appear in my fiction but now I am just thinking about love, vampire style.

If nothing else, I enjoy writing about them being what they really are like. There is a great deal of scope in their character depiction--and I love that! Now, remember, if a vampire wants to jump into the sack with you, there are fangs and the need to feed along with other things. Okay, some of you might like that, so that's cool! Go for it then!