A Demon's Recollection of Meeting The Decadent Mistress of Blackstone House 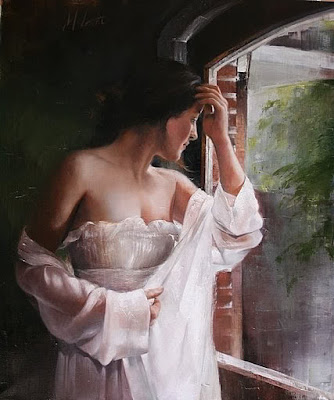 There are more confessions to read. This tells of Eco meeting the depraved Eve Darton, vampiric mistress of Blackstone House. A wanton, degenerate vampire, she only exists for pleasure and sin. She is, by the way, the second most depraved character I've written of, the most, being Countess Bathory!

"Having seen her, I knew I would not destroy her. I reasoned I could hurt Louis differently than that. I could take her from him, corrupt her—ravish her and do what I wished.

Corrupt Eve, I hear you say, that is an impossibility. It is, but I could not know that then.

I was there all night. She finally emerged the next morning. I realized she probably had consumed that horrible tea so that she could go out during daylight hours.

Needless to say, I followed her. She must have realized my eyes were on her because she turned around. I made no move to hide.

It was the first time I heard her voice. Throaty and heavily accented, the French tones sounded musical.

When I did not answer, she looked flattered and intrigued. So I at last introduced myself. I said I was a former acquaintance of Louis and she smiled.

Her smile, though beautiful, was slightly mocking for the corners of her mouth turned down. The result made it look false or at least somewhat wicked. And with the flash of her dark eyes, she looked every bit the wanton I suspected she was.

I imagined Louis’ sexual desires were entirely satisfied with this beautiful woman and I hated him even more for it.

She asked me if I should like to come and see Louis some time.

“I saw you out here. I know you were here all night.” She smiled again. This time it looked real, genuine. “You may call on us whenever you wish, but if it is me you’d care to see, then that is also fine. I am Eve, by the way.”

Eve, like the first woman. What was I then, the snake? If I was, could Louis be the hapless Adam? Was she indeed Eve or was she more like Lilith, another vixen I have loved?

Though her face was beautiful, her smile was intoxicating. Rose, it is only on rare occasions that I have known myself to have a heart—this was such an occasion for I felt it flutter. I think she knew and her smile reflected that awareness. “If you would like to accompany me…”

I needed no further urging and followed her along like a little lap dog.

Can you imagine the scene? Me sitting in a dressmaker’s shop, ignoring the amused expressions on the dressmaker’s face.

Something told me Eve was promiscuous. Any man or demon knows who is, believe me. That in itself, despite what men say, is enthralling. We are all egotists and if a woman is so inclined, who are we to dissuade her?

It was after we left the dressmakers that she stood and looked at me boldly. “The children are alright. I have help.” Another of those mysterious smiles. “Where are you staying?” Her eyes now burned with a different sort of fire.

*
At last we came to my lodgings. They weren’t bad as lodgings go, but clearly it was not up to her standards. Still, she said nothing. Her lips curved and she began to undress.

When she stood naked before me, I cried out: “You have the beauty of Venus.”

She giggled and drew me to her, her hoarse voice whispering to me. “I want you to taste me. I want you to make love to me with your mouth and your tongue. I am yours for this afternoon and after that, too, if you should like it.”

Oh, Rose, forgive me, for I shall not be too descriptive so as to offend your sensibilities. But truly, this was an experience I would never forget.

She would become my addiction. Yes, Rose—Eve would become a raging fever, an exotic disease I would contract and treasure. I never knew anyone—vampiric or human—like that. Insatiable, her desire knew no bounds, which only intrigued me more!

Sometime later, a wench poked her head in. She apologized but Eve invited her in. Actually, she did more than invite her in; she began to fondle the girl.

I watched them for the longest time, and then joined in. Our lovemaking went on for hours. It wasn’t until the girl slept that I told Eve I knew what she was.

“You are a creature of the blood as I am.”

She didn’t ask me how I knew. She only smiled. “Let us feast on this girl,” she said. “And then I shall tell you about myself...”

"Dark and gruesome equates to beauty"
HISTORY, ROMANCE AND MYSTERY

"This being the third book in the series still has me wanting more! It's like watching a scary movie. Better than the first two!"
BJ GASKILL

"The ending left me with my mouth hanging open it was so surprising."
NANCY ALLEN, AVID READER 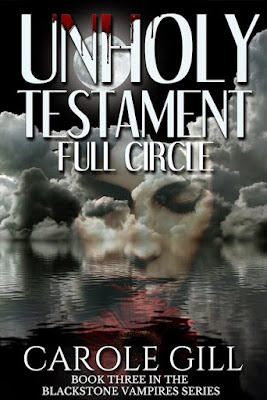 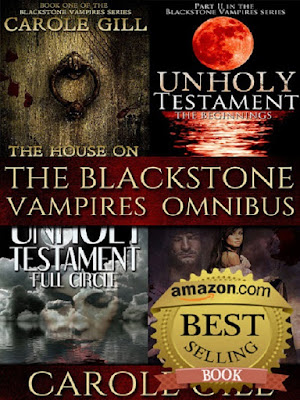 AMAZON
Posted by carole gill at 9:46 AM