FREE READ! THE HORROR IN THE CRYPT! 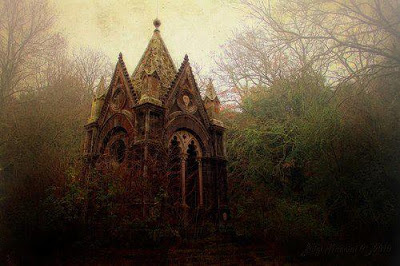 Here's a free read for you. The original story was entitled, Bones which is what it's about, if you don't include the terrible secret contained within!

The Abbaye de Evermonde, south of Dijon in France had been the Mother House for an obscure order. The order had vanished without a trace which was rather a mystery. If people tried solving it they eventually gave up. But then something very interesting happened. It happened when workmen discovered the skeleton of a nun while doing some renovations. Clearly, the poor woman had been walled up for some time.

Everyone was unnerved by it, particularly the Monsignor and the Archbishop of Dijon.

They called in an exorcist to bless the nun and to exorcise any evil that might be present. This they did because it was determined the walling up took place in 1634. That was the time of the devil possessions that occurred in Loudon when demons were said to have possessed the nuns there. France would never be the same or the church either.

And so the exorcist, Father Gaultier arrived looking very bookish and quite capable. He was immediately taken down to the crypt.

“It is just behind here…” Monsignor Chaumaude declared. Archbishop Claran nodded. “There is evil here!”

Actually, there was no need to say that for the Exorcist sensed it. There was a smell of rot and something else: the taint of evil. Oh yes, he had smelled it many times.

Both the Monsignor and the Exorcist paused before going into the newly discovered burial chamber. But with a nod from the Archbishop they at last entered the dank, dusty place. There before them, were the skeletal remains of a nun still dressed in her habit and veil.

“She is long dead… poor woman… I will bless her,” The Exorcist said.

As he began, a great wind stirred and a parchment appeared seemingly from nowhere. It folded itself into the shape of a dagger and began to stab at the priest, eventually drawing blood.

At the same moment, something blew up from the skeleton itself. It was as if a fierce stench-filled wind had formed itself into a swirling mass. The power was so great, the Priest grabbed onto the wall in order to steady himself. The Monsignor appeared to be shaking. He said nothing but pointed at the parchment which now lay on the floor. Father Gaultier glanced at it and then at the Archbishop.

And so it was. “It is a confession… and it is from the Mother Superior!”

The writing was strange; it looked as though a fevered hand had accomplished the task.

“I Jeanette du Tribon, confess on this day I have cavorted with demons… and Satan himself. There is no sacrilege I have not taken part in. Blood rituals and cannibalism, including child and infant sacrifices, whatever has been asked of me I have done willingly and have entreated my sisters to do so as well. We perform deviant practices and worship Satan. He rewards us… randy beast that he is! I gladly gave my soul to him and would give everyone’s if I could…!”

There was another document as well; something written in ink and in a steadier hand. It said the nun was possessed by a demon. Further it said:

I, Cardinal, Vincenzo, Papal Representative of the Holy Father in Rome, have taken the decision to wall up one of Satan’s own demons. Through careful examination it has been determined by me, that the body of Sister du Tribon is possessed. The devil will not budge. Any attempt at freeing the poor lady from the possession has failed. Evil must be contained and not permitted to spread!

It also said something in Latin:

Father Gaultier stopped reading, for he knew what it meant. It was a warning that the parchment containing the confession must not be touched as it was also possessed!

Just before the Exorcist cried out, there was the sound of loud, raucous laughter. Father Gaultier whirled around to find the skeleton gone. In its place was a living woman attired in the ragged habit of the nun!

“Hear you, Priest! I am as you see me, Mother Superior of this Church… and sister to my sisters. I am also mistress to Satan!”

The poor Priest could not say anything—it was as though he had lost his powers of speech. In desperation he turned to the Archbishop only to find him grinning in the most evil way. It was as if he was in cahoots with the Mother Superior!

In what seemed scarcely a moment, the two of them along with the Monsignor had torn their clothes off and were committing sin up sin on each other’s naked bodies.

The Exorcist’s revulsion paralyzed him until they stopped what they were doing and began to converge upon him, their faces contorted by evil. If that was horrible, more shocking still was the sudden appearance of church officials and others; a great mass of people, previously unseen.

Father Gaultier could not believe his eyes, for in their midst stood a great winged being. There was no mistaking it was Satan himself. “Yes!” Satan cried. “They walled her up when she only contained one demon—just one of my servants. In disturbing the parchment you have released all of us—demons all; far, too many to count for we are truly Legion!”

“And he asked him, what is thy name? And he answered, saying, my name is Legion: for we are many.”