99 cents thru Sunday! Meeting the Queen of France! 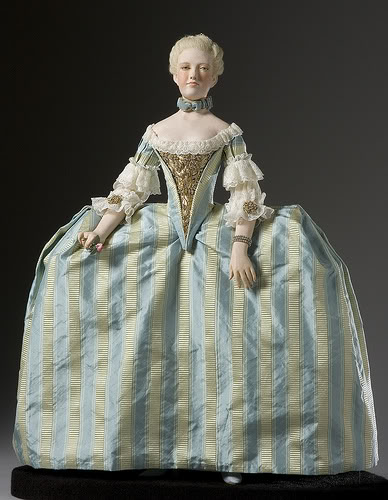 Justine Bodeau had a living life before she had an undead existence. After being orphaned, she finds herself, through the help of her mother's friend, employment as a seamstress. The family are social climbers and they do attend a ball at the Versailles Palace...


“The Queen will be in attendance! Imagine, Justine! She will be there – for my eldest daughter is to be presented at court.”

Such was the custom of the day before the world changed and blood ran through the streets of Paris.
“Think of it, Justine. You will see her!”

I begged off. That is I tried so hard not to go. It was intimidating. However, after a great deal of coaxing I did go. Mme. Coulon was delighted. “You will attend to us as our personal maid. Paulette and I shall be so lucky to have you there.”

Paulette was the daughter I felt certain was being groomed to search for a husband. The Coulons were committed to raising themselves ever higher. If there was dissatisfaction with the monarchy it was not known in their house. Not with an unmarried daughter and social climbing parents.

“There are so many suitable gentlemen, Paulette—please try and act less awkward. Do try and be at ease.”

The night came at last. Mme. Coulon was so excited she was stumbling over her words. “That is it! Have you ever seen such beauty?”

Paulette was delighted. “No, indeed Mama! I feel like royalty myself!”

I thought my mistress would say something to keep her daughter’s feet on the ground. Yes, they were a wealthy merchant family, but they were not aristocrats.

When Paulette saw me looking at her she smiled, “Don’t look at me, silly! Look out there!”
I did just as our carriage was given permission to enter the palace gates. That’s when I took my first look at Versailles.

It was stunning and I gasped. My eyes filled with tears at the sheer beauty of it. There were the famous gardens even I had heard of. And there, just beyond them—was the great glittering palace. It seemed to be filled with golden light.

My mistress only stopped chattering when the carriage drew to a stop. I had already been instructed to follow along behind.

There were other guests milling around, each judging the other’s importance by their apparel and demeanor. Mme. Coulon was giving her daughter step by step instructions of how to move and what to say.

Two liveried servants ushered us inside.

“We are entering Olympus!” Mme. Coulon exclaimed. “The home of the Gods and Goddesses.”
And so we were. The opulence and splendor was all around. Clearly it could be nothing else!

We passed from one hall to another. Officials of varying importance saw to this, each haughtier than the next—even in their subservient state, they exuded snobbery.

When we passed through the Hall of Mirrors I thought I would faint. Mme. Coulon whispered, “This is only the beginning. Look!”

A handsomely dressed man, in lavender frock coat, smelling divine bowed slightly. I would soon learn that different levels of bowing—varying from deep to less deep were associated with class and standing. The bow accorded Mme. Coulon and her daughter (I didn’t count, of course) was a bit shallow.

When I heard Mme. Coulon’s hoarse whisper, “The Queen!” I almost stumbled.

She was there, resplendent in a gown the likes of which I could not have even dreamt of. What a poor excuse for a human being I was to be so impressed!

I had quite forgotten the poverty I sprang from. Would my poor parents be turning in their graves? I should think they would have.

But it didn’t matter! The spell was too strong—the magic of wealth and beauty too powerful to overcome.

We all curtseyed. And when the Queen complimented my employer and Paulette on their gowns and insisted on knowing who the seamstress was, I could barely breathe. But the royal command received an instant answer and I was introduced.

“It is my seamstress’s handiwork, your Majesty!”

There she was! Queen Marie Antoinette herself, smiling down at me. She was a goddess, a beauty, like something come down from heaven to dwell among lesser mortals, Olympus indeed!

Whatever I had sprung from the recollections were gone—blinded by the light that emanated from this real goddess.

“Shall I be naughty?” she winked at me. “Shall I steal you away?”

That was the first I heard of it. If I thought my employer would look horrified she did not. She looked proud. It was a great compliment to her taste for her own seamstress to be plucked away by the queen of France! As for myself, I felt I was dreaming..." 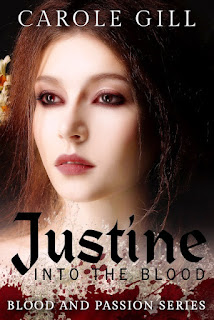 Email ThisBlogThis!Share to TwitterShare to FacebookShare to Pinterest
Labels: 99 cents, justine into the blood, queen of france