RANTS ARE BACK: EVIL DENTISTS! (reposted by popular demand)! 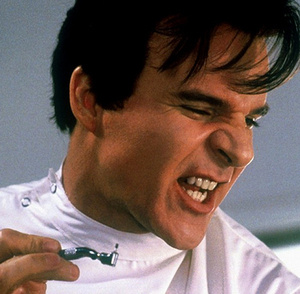 Yes, let's face it. There are things to rant about, things that make us crazy and tick us off. Well, the focus of these posts will be those people and situations that make me rant! My rants began four years ago on a different blog. I'm the original!

HERE IT IS, AS PER MANY REQUESTS: 'EVIL DENTISTS'!

"I've been fortunate I haven't had an evil dentist until fairly recently. I have no idea what the problem was. It is a one-off because I refused to have said dentist ever treat me again.

Did you know that a small percent of the general population is supposed to be psychopathic? Now the term I believe is sociopathic, but an unsympathetic, unfeeling, compassionless individual by any other name is a horror at any time, but most especially when one is dependent on said individual.

"Sorry, but that hurts. Could you just wait a moment?!"

Ah, I thought as I began to recall that scene in Marathon Man wherein Dustin Hoffman finds himself at the 'mercy' of an escaped Nazi. This Nazi was a dentist and he's just come out of hiding. This is the famous scene where  the dentist wants to know if it's safe for him or not. He thinks Hoffman knows, but of course Hoffman doesn't. Nazi dentist is assuming he knows.


I thought of this scene shortly after I left. It helped. It not only helped me to be able to laugh about it all, but it helped me to feel a kinship with this man who is being tortured by a sadistic lunatic who happened to be a dentist.

Who doesn't feel that initial fear when leaving the safety of the dental reception area and walking across gleaming floors toward the dental treatment room. Closer and closer we step, knowing we are stepping ever closer to THAT ROOM where the drill is,where those nasty, horrid instruments are. That one, you know, with the sharp end that hurts like hell if it slips.

"Just going after the plaque now!"

How steady are the dentist's hands we think?! Even if it is a kindly dentist, a dentist we have developed a rapport with we still wonder.


Perhaps he just found out his wife is cheating with his best friend! Or his son was arrested selling drugs and won't be carrying on the tradition of denistry.


Do we greet the dentist a little too effusively watching oh so carefully his reaction to our overt friendly, cheerful attitude?


Then possibly, nervously--do we watch his hands. Do they look steady? Is the mood alright?


You see there might be a little checklist we have that we run through. It is our way of reassuring ourselves that the dentist isn't unduly upset.


Of course here is the problem: IT DOESN'T WORK WITH NEW DENTISTS!


"Hello new dentist, you look friendly enough but are you perhaps a little sadistic, just a mite? Did your wife/husband/girfriend/boyfriend aggravate you? Was the intimacy that you looked forward to not performed right or up to your expectations? Are you pissed off now about it? You didn't come in here today to get back at anyone, right?


I mean you're smiling at me, but I don't know what kind of agenda you might have!


Dentists are in control! We can do with that control what we will AFTERWARDS, but whilst we are sitting there trapped, with our mouths open, nervously watching them, WE ARE SO UNDER THEIR CONTROL!


Whew! Takes a breath. Thank you! Much better now or UNTIL I AM SITTING IN A DENTAL WAITING ROOM--AND I HEAR, 'THE DENTIST WILL SEE YOU NOW!'

Disclaimer: I’m far from perfect, but I try never to hurt anyone’s feelings or to cause them worry. Having said that, these are my rants; I rant when my tolerance level is nil or below.