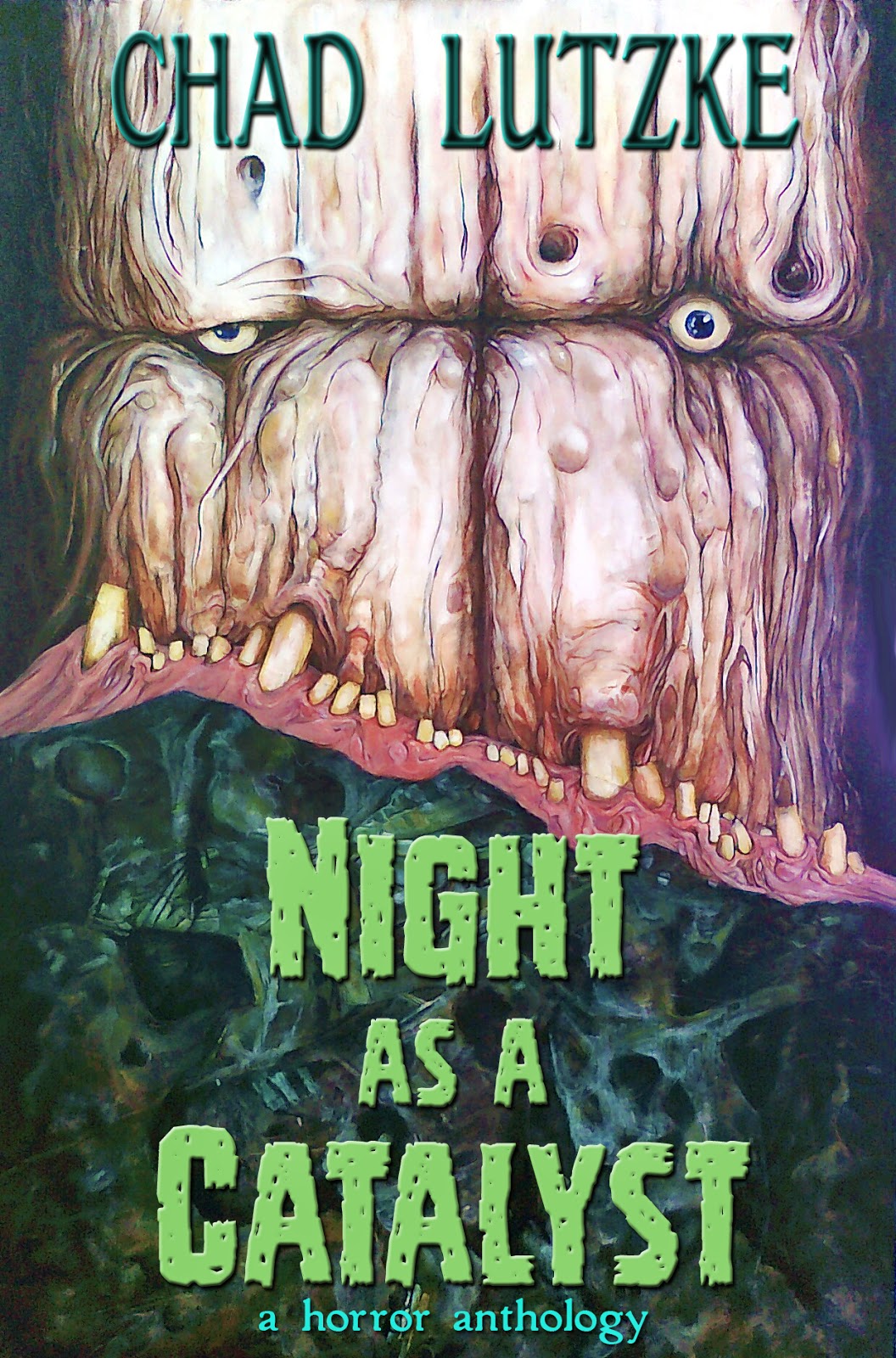 It will be 99 cents from today until Sunday! 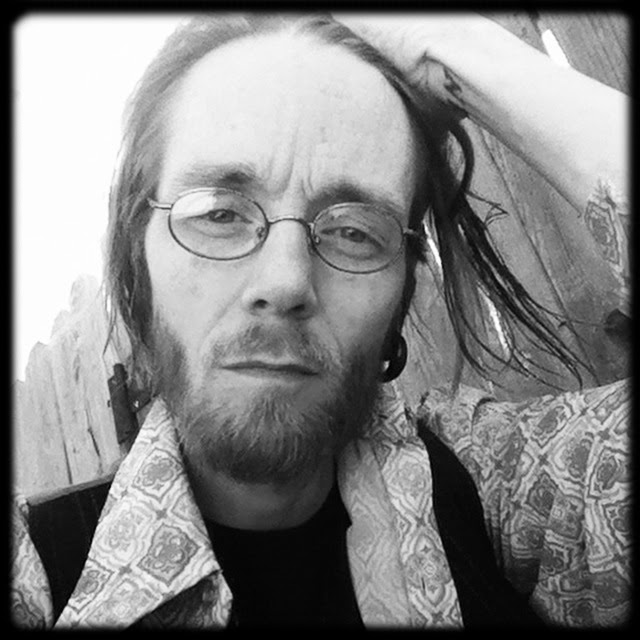 As beautiful as the night can be, it often plays a role in something more foreboding, supplying the catalyst for things both terrifying and imaginative.  Utilizing this hallowed time of the day, author Chad Lutzke has written and compiled 18 stories, with creature features, sleep deprivation, hiding the undead, revenge, cannibalism, morbid habits, and executions of karma being just a handful of the themes covered in this book.  Read on and discover what the mind produces when using the night as a catalyst.

What Others Are Saying About Lutzke's Work

"Chad Lutzke is an excitingly fresh emerging voice in the horror scene.  His writing pulls you in, and his stories are chilling and stay with you well after a thoroughly satisfying read!"
~ Nicholas Grabowsky, Black Bed Sheet Books & author of Halloween IV
_______
“Chad Lutzke has an awesome grasp of descriptive writing...Brilliant malevolence! He is a true master at his craft”
~Blaze McRob, Bram Stoker Award nominee
_______
" Lutzke is a student of the horror genre with a rich voice that needs to be heard.”
~ author, Terry M. West
_______
"Lutzke's writing is personal, detailed and often heart breaking in a terrifying way."
~ Matt Molgaard, Horror Novel Reviews
________
"Chad Lutzke is an emerging and exciting dark author with a firm grasp on the genre. His shadows have drastically different heartbeats, unique souls, but are unified by their dark charm and bleak shrouds."
~ Zachary Walters, The Mouths of Madness Podcast
_______
"Lutzke has a way with words that merges horror and compassion in a single sentence. Reminiscent of Robert McCammon."
~Joe Mynhardt, Crystal Lake Publishing
_______
"Unique and enveloping. At times playful and alternately existential, though always invoking empathy for the protagonist's predicament. Chad Lutzke's writing is doubtlessly bleak, yet with an odd sense of hope."
~ author, James Ferace
_______
"Chad’s writing is a trip to the buffet of horror. No stone left unturned."
~ Blaine Cook, vocalist for The Accused, Toe Tag, & The Fartz

Here is a sample from "Birthday Suit," one of the stories from Night as a Catalyst:

As the evening matured, the moon guarded the neighborhood in a blanket of blue; while in the tree house, gossip was slung, pages were flipped, and appetites were gained. Mrs. Tessal headed out back with the quart of milk and a Tupperware container full of cookies. She pulled a rope below the fort, and the other end tipped a small, rusty bell that struggled to make an audible ring.

"Send down the bucket, boys. I've got goodies for you. Chocolate-free, Shawn."

Both boys hurried to the bucket. Kyler got to it first and slowly lowered it down to his mother. She placed the goods in the bucket and tugged on the bell again. Humoring the boys.


Kyler pulled the care package up through the hole in the floor of the tree house and pulled out the contents. The milk was freezing cold. It would feel good going down on such a warm night.


"Oh, and Kyler. No whizzing out the windows up there. If you guys need to use the restroom then you come inside. I'm leaving the slider unlocked for you."


"Yes Ma'am." They both chuckled, knowing full well they'd be watering the lawn at some point.


The cookies were still warm and chewy. While the boys carelessly ate, the open pages of Fangoria collected the small crumbs that dropped, while the bigger chunks acted as edible bookmarks. By the end of the feast, only drops of milk remained at the bottom of the quart, bellies were full, and veins rushed with sugar.


"I'll be right back." Kyler insisted.


Shawn watched as Kyler hurried down the ladder and sprinted for the garage—the glow of the moon lighting the way. Moments later, Kyler returned holding something in his hands. He climbed the ladder and fed a pair of binoculars through the hole in the floor and pulled himself up.


"No. We're not watching Suzie. This is for spying on every other house but hers."


Shawn gave a disappointed look. He grabbed the binoculars and brought them to his eyes. At first everything was a blur. He lowered them and looked for a line of perspective, then brought them to his eyes once more. One street over he could see someone's living room illuminated by nothing but the glow of 100 yards of green football field being cast from a large flat screen. A man sat reclined in his chair, intermittently sipping on a beverage. A quick sweep around with the binoculars led to an open, well-lit garage on the other side of the street.


"Nuh uh. Let me see. Where?" Kyler snatched the binoculars from Shawn and searched intently for the hot female.


Kyler searched frantically until he spotted the garage. A shirtless, overweight man sat at the end of his weight bench covered in sweat from lifting.


"Awww..you jerk!" Kyler punched Shawn in the leg, who was too busy laughing to feel it.


They hadn't even heard Mrs. Tessal open the slider. Kyler dropped his dad's binoculars out of his mother's view.


The house went dark, save for a dim kitchen light showing the way for any midnight trip to the bathroom. After recovering from the startle, they both wiped their brow symbolizing a close call.


"Ya know, Kyler. Does Suzie even like you back?" Shawn asked.


"Sure she does. Just the other day in school she asked me to stand by her in the lunch line."


"She made you stand there to keep her place in line while she went and talked to Bill Weston."


"No! You make it sound like I've got no chance at all. You don't see the way she looks at me."


Kyler lit up. "Good idea! They have that special showing of The Shining next week. She'll be all kinds of freaked out."


"There ya go! Hey, maybe we could double date."


Kyler laughed at the thought. "Who are you going to take? Your little sister?"


Shawn's fist made contact with Kyler's shoulder. "Lame. I'll get somebody to go. Maybe that new girl."


"Good luck with that. She'll get freaked out by your horror fanboy self."


"No you won't. You’ll be chanting ‘red rum’ an hour before we even get to the theater."


"You challenging me, bro?"


Kyler puffed his chest out. "I challenge thee. If you get her to say yes, you can't say 'red rum' one time all night.


"That either. You can't do any line from the movie."


"All work and no play makes Shawn a dull boy."


"Hey, technically that's not even a line in the movie."


A light flicked on in the house next door, catching their attention. Kyler quickly raised the binoculars and watched his neighbor, Mrs. Wilson, open her fridge and search it.


"What do old people do all day? Kyler asked. “I mean, Mrs. Wilson just shuffles around, feeds her cat, waters her flowers, and fills the birdfeeder. That can only take up so much of your time. What do they do the rest of the time?"


Shawn lied down and got comfortable in his sleeping bag. "They nap. Nap and watch game shows, I think."


Kyler turned around to see Shawn tucking himself in. "You going to sleep?"


"Same. Those were some good cookies though." Kyler followed Shawn's lead and situated himself for sleep.


"Yeah they were. Your mom is like the Stephen King of baked goods."


"What does that even mean?"


The boys lay silent for a full minute before Shawn threw in the last joke of the evening. "Red rum!" An explosion of laughter traveled halfway down the block.

As the crickets sang their lullaby, the boys drifted off into a satisfying sleep; safe within the four walls of their favorite place on earth.

Initially their slumber was not disturbed by the beam of light that shot down from the sky and into the backyard. The beam of light that left behind a perfectly black, round scar in the grass and two slender humanoids with skin that resembled that of a dolphin. The figures stood silent in the dark while a gelatinous layer of liquid formed around their feet and eventually up over their heads, as though sinking into an invisible pool of mucus.

It was the smell of the burnt grass that stirred Kyler. Still half asleep and dreaming, his imagination got the best of him as he envisioned flames from below, threatening to lick his precious fort to death with him in it.

Kyler pushed himself up and peeked out the makeshift window facing the back of the house. Both figures stood on the burnt ground; a blue ghostly aura around each one. Kyler rubbed the sleep out of his eyes and squinted, fighting through the blur. He squinted harder. The sight of two figures glowing blue in the backyard made little sense, even for one who was still half asleep. Once the blur had gone and he was fully alert, fear dried Kyler's mouth and gripped his throat. He reached down behind himself without looking and struggled to make contact with some part of Shawn.
***


Chad lives in Battle Creek, MI. with his wife and children where he works as a medical language specialist. For over two decades, he has been a contributor to several different outlets in the independent music and film scene providing articles, reviews, and artwork, as well as his own—now defunct—publication, Cornflake Overdose. Chad loves music, rain, sarcasm, dry humor, and cheese. He has a strong disdain for dishonesty and hard-boiled eggs.

He is a regular contributor to Horror Novel Reviews, Horror Forevermore, and Heavy Planet. You can find his work in Shadows & Light #3 & #4, A Merry Scary Christmas, Famous Monsters of Filmland, and his double feature collection series, including books I and II: Two Before Dawn and Little Ones of Wood & Hair, which can be found exclusively as ebooks on Amazon; however, all but two of those stories are contained within the pages of Night as a Catalyst.

He can be found lurking the internet at the following addresses: