Using history and The Burning Times in my novel! 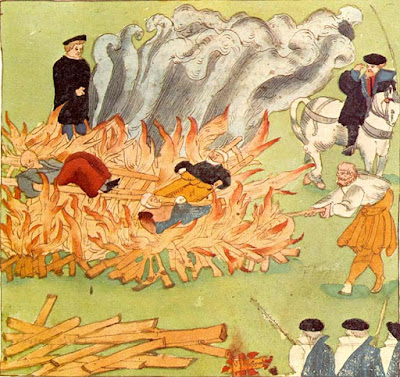 Ah, yes! Nothing like an action which was all too prevelant in Mediavel Europe. Burning witches! That went on for hundreds of years all over Europe. Salem, Mass. got into the act with their own brand of lunacy which at least didn't involve burning. Rocks were laid upon something like a door which was pressing upon the chest of some hapless local inhabitant. There are very interesting documents which show, particularly in Salem, how an accuser's land increased when the accused neighbor was no more. Human nature can be so fascinating.

Okay, so why blog about that now? It has to do with my work in progress. If people were accused of witchcraft, their cats perished along with them!

Here's a quote which put me off the coronation of QE1, Somehow I don't think it would have been depicted in the Cate Blanchett films about Elizabtheh 1.:

“Last Saturday the coronation of Queen Elizabeth was solemnised in the city with mighty bonfires and the burning of a most costly pope, carried by four persons in diverse clothing, and the effigies of devils whispering in his ears, his belly filled full of live cats, who squawled most hideously as soon as they felt the fire. The common saying all the while was [the cats’ screeching] was the language of the Pope and the Devil in a dialogue between them.”

How horrible. It's one of the issues that I am researching for my book because it's relevant to the plot. Cats feature in my book as they try to help a victim of war.

My cats know all these things as do their human friends. Very special, heroic humans, I might add!

I love history and have incorporated it in my novels and I do no less in my new book. History, even if one is writing a contemporary novel, has shaped the world and us in it. Things happen because of it.

Hatred, bigotry, religious intolerance are integral to my plot and characters.

I think fiction would be shallow and pretty meanignless without demonstrating why things have happened the way they have. History and events in it are, for me, the impetus for getting my story off the ground. It not only has to be off the ground it has to fly, move and affect the reader!

As one of my cats, in the book says, "I have always made allowances for humans because they are so incapable of being fair sometimes."

Cats can be difficult, even the cats know that, but they aren't in the position to incinerate entire populations of human beings just because they feel they ought to.