The Ointment: A Story for Easter 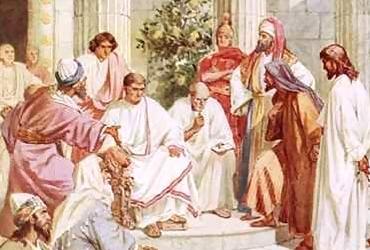 This story eventually inspired a book and an entire series. It is an intelligent demon’s account of The Crucifixion.

"Yes, it is I—Eco, the son of a fallen angel and a human mother. Eco, the demon spawn who lives his eternal existence glorying in his damnation. Eco, who was sent by Satan to see him whose birth was prophesized.

But the babe was just a babe and nothing more. Truly, I was not particularly impressed I have to say, not at first. It was as the man that I was struck by him: by his voice and what he said. “Pray for those that persecute you!”

Could he mean it, I thought. How could he say such a thing? The very logic of it was illogical, was it not? I was thinking this when he looked at me. His eyes, seeming to go through me, piercing into my flesh in a way no being has ever been able to do.

Our eyes locked onto one another’s and I felt every bit the demon I was. And because I did, I hated him and found I wished to destroy him. This hatred festering until it seemed to become its own separate being. I became like one obsessed and began following him from place to place being drawn to his words but at the same time hating them because I hated him!

If I hated him others hated or feared him. Rome considered him a threat to its power and so he was eventually arrested and tried for having this power or seeming to. That was the truth of it, whatever Pilate postulated. Pilate, Governor of this hot, dusty troublesome place was Rome’s representative. Pilate who had been sent there for some infraction, Pilate, who would eventually commit suicide was now to move this entire thing to its earthly conclusion.

“Take him away…” His final words. I stood amongst supporters and enemies too, all of us witnessing. And then when they took him away, I ran along and watched it all. There was screaming and shouting. There were onlookers tearing at their clothes and wailing for the Rabbi.

It seemed to me he had more support than not! That’s when I began to grow fearful. If I felt the slightest bit of satisfaction at the suffering of this, my avowed enemy, I suddenly became aware of an awful truth, a certainty I knew to be a certainty! This Rabbi was going to be remembered! And it was going to be Rome’s fault because they were making a martyr out of him! My hand flew to my mouth as I considered the ramifications.

And then the most amazing thing happened! The Rabbi looked at me! Oh yes he did! He turned around and found me instantly! If his look had been one of condemnation before it was different now. There was calmness in his eyes. His expression was neither triumphant nor vengeful. If anything, it was saintly. It was then that I knew. He was the Messiah! He was what they said, God’s son come to earth!

I gazed Heavenward for a moment, and then I understood everything. No matter how much terror Satan causes or those in league with him cause, they will never defeat Him!

I left then; I just walked through the deserted market, up past the city gates and onward. At last I came upon a man. “Have you seen him?”

I knew who he meant at once. “Yes. They are taking him to crucify him!”

The man nodded and hurried away. It was then that I heard Satan’s voice; it was as though he whispered to me. “Judas,” he said. “He is mine now.”

We were sitting in one of his favorite caves just on the outskirts of Jerusalem. He looked very pleased. “I spoke to him in this very cave, you know! I offered him anything he wished. But—he kept talking that nonsense.” He glanced over at me. “But it is all done now, isn’t it?”

He was so pleased. It didn’t occur to him that he could be wrong. Actually I never regarded Satan as overly bright.

Frankly, and I don’t mean to sound boastful, I find him to be (at times) a little on the thick side. You see he doesn’t quite get things others do. “I am sorry Satan, but I cannot agree with your pronouncement. I think they have made a martyr of him. I think this is the beginning and not the end!”

He scowled. “I think you are wrong. I think he is gone now and the only thing left of him will be his rotting corpse. Why would his name be recalled when others have gone before and lie dead and forgotten?”

I nodded, but said nothing. I knew what I knew. Satan’s self assuredness would prove as wrong as Rome’s intention to suppress it all.

If Hell burns, its flames are never as bright as Heaven’s light. Truth is truth after all. Ah! I have surprised you! Well, it is truth and demon though I am; I know truth when it stares me in the face.

I knew something else as well. This truth was subjective. I was changed forever. Now for the first time in my existence I had become fully aware of my own limitations. Yes, I was immortal but it was the other side that had the power. We could tell ourselves we were powerful but we weren’t and we never would be.

All we could create were different levels of mischief of varying intensity. Yes, we would terrorize and torture, we would spread evil through willing vessels but in the end we were little more than insects, little more than flies in Heaven’s ointment.

For Heaven’s ointment has the power to befuddle us always and forever."


The novel it inspired is Unholy Testament – The Beginnings, Book 2. The Blackstone Vampires Series
,

It is one of the stories in Carole Gill's House of Horrors.