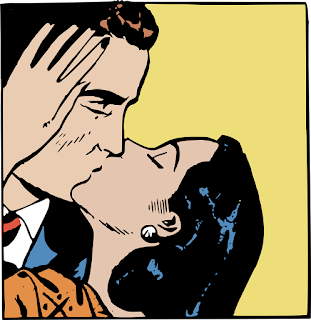 Hi folks, did it again! A horror writer's homage to romantic fiction. It's spoofy and I had fun writing it.

“Gardenia, you will adore him. He is so sexy; he’ll make your toes curl!”

Gardenia looked perplexed, not an uncommon expression for her. “But I just got new shoes, they won’t fit with curled toes!”

Gardenia sighed. Sighs were always forthcoming when thinking was in progress. “Well, sure!” she lied. “Silly!”

Her friend felt relieved. Not a lot, not as much as if she believed her. “Tad Boulder is starting Monday, I just got word from personnel. Wait till you see him. I think he’s more your type than mine.”

Jocelyn didn’t really mind. She was still with Horst Wowzenheimer. A man who never flaunted anything unless his Y FRONTS were off.

She wanted Gardenia to date again. Poor kid had been dumped by her boyfriend. He said ten blocks was too far to travel to see her. What a loser he turned out to be. Still, he was kind of cute in a slightly creepy way. Well, working for his uncle's funeral home was never a major turn on.

Yes, Jocelyn reasoned, her friend should have at the very least, a one-night stand or even half a one-night stand. She felt it would do her good, in fact she was thinking of loaning Horst out to her, but that was kinky. Still, it was a thought. What an unselfish act that would be!

Little grey cells or even big grey cells did not tend to dominate either friend. But Jocelyn had at least managed to read an entire book recently. Only twenty pages, but still, and the words were multi-syllable and everything!
***
Fate took a hand. Both friends didn't know how to get this thing going--but then it just happened. Gardenia caught him changing his shirt. He smiled at her when he saw her staring at his six pack abs. "I work out a lot." That was said so humbly, even though he did pause a few times before putting on the dry shirt. "Air conditioning broke down, what a bummer."

She nodded, speechless and filled with wonder and a great urge to check him out all over. But he was taken with her as well. That was what made it all the more exciting.

In truth, he had her sized up right. 34 DD. He could tell, it was something he was expert at. If they gave out doctorates for that sort of skill, he'd have attained one for sure!

If she wowed him, her private bits were all throbbing! Better than leaning against the washing machine when it was in the spin cycle. What a hunk! Aside from his build, his eyes fascinated her. What struck Gardenia most about them was, he had two and they were both the same color! And he didn’t blink too much. Not like Mr. Gorkin, her old history teacher. He must have blinked a thousand times a minute. Poor guy. But that was then and this was now!

Tad had immediately asked her out for a cappuccino. She tried to look interested in everything he said, just as Jocelyn advised. When he spoke about his landlady raising the rent, Gardenia looked amazed. “Oh, that’s so not good! Goodness! Whatever will you do?!”

Tad’s handsome tanned face twitched with emotion, yet he still managed a broad smile revealing his perfect white teeth. “It’s annoying but it’s only five dollars a month increase. I think she likes me!” he winked.

She looked startled, worried for him. “Five is still five! Can you manage it?”

He fell in love with her from that very moment. She was caring and sweet. Gorgeous and kind. He couldn’t wait to see her naked. So when he took her home, he could hardly believe his luck when she asked him in.

They were in each other’s arms in a second. No, less really—less because they had more or less walked the two blocks from Starbuck’s that way, so much so, a few funsters called out: “You guys glued together?”

When he began kissing her ‘like a woman ought to be kissed,’ she whispered, “Don’t! Don’t! Then in the next breath, “Don’t…Don’t stop! Don’t ever stop!”

“I won’t,” he swore. And he didn’t. As a matter of fact, they had to call for an ambulance. The two were carried out on a stretcher still in each other’s arms. Truth be told, they were in the clinches, too!

“Better throw a blanket over these two love birds!”

So, they did. Happily, they still had vital signs, although one paramedic was pleasantly surprised.
What he had seen in his career!

from: HIS MAIN SQUEEZE!