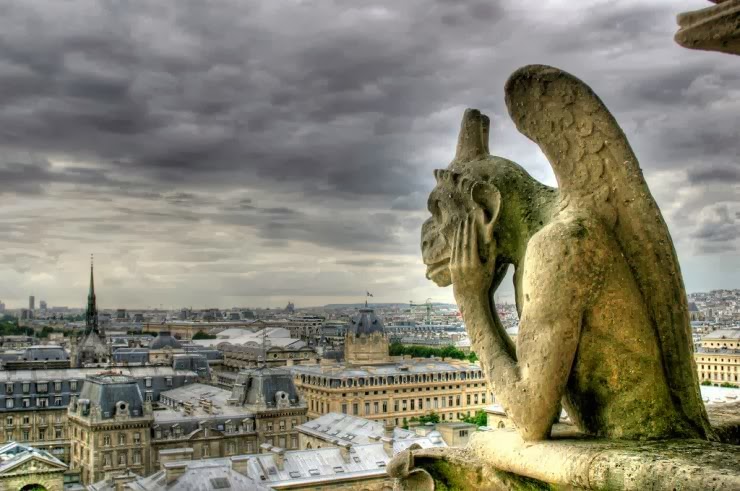 Where does the word 'Gothic' come from? We can say that the word, 'Goth' refers to the Germanic tribes of maraudering  people called Goths who invaded Roman Dacia in the 5th Century, but what about the word that evolved from that?
Could 'Gothic'come from Gothic Cathedrals that gave the world Gothic architecture? Those magnificent structures tended to use gargoyles to drive away evil spirits. That's interesting right there. What did those churches think might get in? Evil in the guise of Satan and his demons, perhaps?
Maybe Gothic architecture then went on to inspire Gothic literature. If it did, Gothic literature was inspired by the grotesque! And if that's the case, why? Was the primary purpose of this literature to examine the human soul and how it dealt with evil?
This makes me think of internal gargoyles! Well if the cathedrals had them to ward off evil, what might man have? How might he have protected his soul from evil forces? Perhaps if he was warned about evil by reading about such things it would give him a better understanding of what might be out there.
I write about the battle between good and evil in my Gothic fiction. It is WHAT MAKES GOTHIC FICTION, GOTHIC. Anything less is watered down and anything that purports to be Gothic horror and is watered down does the Gothic genre a terrible injustice.
Take Stoker's Dracula. We have the battle between good and evil there. That is the primary theme of Dracula. But along with that we have the general creepiness that abounds in that great novel!
That makes me think how important setting is in Gothic novels. Without the all-pervasive atmosphere of death and decay producing its own particular kind of menace, it just wouldn't be Gothic.
Writers of Gothic fiction want the characters to leave their comfortable world behind and step into the dark, threatening world that is laid bare for them. There is also the suggestion that what was once alive and vibrant (think Dracula) no longer is: the man, the castle, his wives, his world all undead--all gone from the living world and inhabiting a dark and decaying world of undeath.
Gothic uses much physical imagery: cemeteries and images of death abound in this type of fiction. As a matter of fact, I have made Death a character in two of my novels Unholy Testament - The Beginnings and Unholy Testament Full Circle (and why not, too)? Death is scary, he's a given but if he was in fact a real being, he might feel tragic; paranoid about the situation he finds himself in. After all, he's feared and hated and it affects him!
Here's an excerpt about Death from Unholy Testament - The Beginnings:
"I looked into the most morose face I had ever beheld. His skin was so white as to be nearly translucent, his eyes were flat and without any light in them. When he turned, I saw he had bulges on his back.

He turned back and smiled sadly. “Those are the remains of my wings. I really should have been an angel if not for my heritage.”

I soon grew weary under his gaze for it was so intense. “I don’t like being here either,” he said. “I am an outcast. I always was and will be, hated by the forces of good and evil. But that is my lot, and I can do nothing about it.”
(end of excerpt)
In all fiction worth its salt there is conflict but in Gothic fiction there is great threat; the threat of violence, demonic possession and (often) madness. And what is madness? Are people really mad or are they in fact possessed by demons? We can believe one thing while titillating ourselves by wondering about another! And who can say for sure anyway?!
I've had interesting comments from people who 'prefer reading about vampires with no mention of demons or Satan.' Well--don't pick up anything labelled GOTHIC FICTION then!