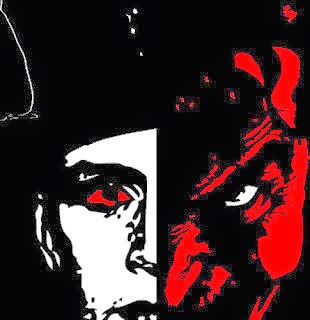 previous posts on this. HOW DO YOU TAKE YOUR GOTHIC FICTION?
and GOTHIC FICTION IS GOTHIC
We agree that Gothic fiction depends a great deal on setting. As a matter of fact it's crucial. There are usually crypts and spooky castles and the all-pervading feel of menace and melancholy. The setting is so important as to almost become a character in the plot. I mean Wuthering Heights taking place in the South of France just wouldn't be the same, would it?

With regard to themes, Gothic fiction has hugely dramatic themes: there's madness and obsession for instance.

Jane Eyre portrays madness in the guise of poor mad, Bertha Mason locked in a tower. She has a keeper, one Grace Poole who seems, I have always thought, to be serving out a punishment perhaps self-inflicted for something in her own past.

The madness of guilt is depicted brilliantly in Poe's The Tell-Tale Heart. The more we read of the narrator's words, the greater we understand his madness. He is after all, telling us he had reasons to kill 'the old man'--reasons he is certain we would all identify with; he’s rationalizing, poor thing.

Madness can affect anyone. We’re just not used to the term in our daily lives any more. There are reasons for everything, politically correct words for everything. The tortured characters of the Poe stories would be zipped in to see a counsellor and sent home with medication or possibly prescribed it in prison.

“Yes, we know about the old man. We found him under the floorboards, remember?  Well, never mind about that now. This is only the beginning of your therapy. Yes, that’s right. This medication is vital to relax you so that I can begin to help you…now won’t that be a relief?”

A supposed conversation present day with the prison psychiatrist after the narrator in The Tell Tale Heart has been incarcerated in a ‘secure psychiatric facility.’

Not exactly hard-hitting that way is it?

Having said that, I think Gothic fiction most certainly can be contemporary. I always thought Sunset Boulevard (film) was wonderfully Gothic. The ageing movie star, the once-beautiful Norma Desmond is sinking ever more deeply into MADNESS, so that by the end of the film she is a blurry face dancing into the camera, her mind gone forever.

By that time, the camera has become her personal devil if not Satan himself. She lived for the camera and fell apart when it abandoned her. The camera is culpable in Norma Desmond’s madness and possibly an accomplice in the murder of Joe Gillis the hapless young man she murders. 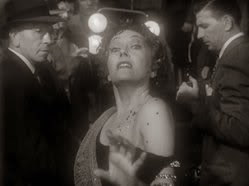 Poor Norma! But what about all the others like her? Ah, but they fatten up an industry. Where would plastic surgeons be without them? Of course as in the best traditions of Gothic horror, they might have one too many or five or ten too many surgical procedures so that they then become their own sort of monster. Does vanity drive them to this? If so, what preys upon those vane men and women? Could greed be the catalyst in this?

That’s pretty Gothic to me. It's one of the Seven Deadly Sins!

I’m thinking about Goethe’s Faust now in relation to the Seven Deadly Sins. Dr. Faustus was prideful wasn’t he; proud of his education and intellect and sought forbidden knowledge. In his case, he wished to know too much. 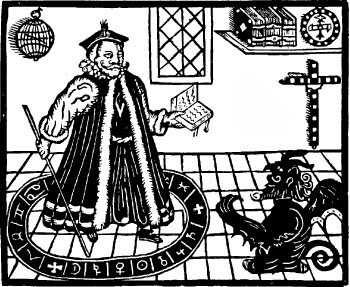 He is heroic and a sinner too. Yet we can identify with him, because we, too, might fantasize about challenging heaven and the cosmos. Who doesn't want to know the secrets of life and death?

This search or quest for forbidden knowledge always leads to a fall. Part of our lesson or the lesson that is so vital in Gothic fiction! Seek too much and you are punished!

Temptation tempts and then after the punishment: payback. Dr. Jekyll had a damned good time as Hyde but paid as Jekyll. Von Frankenstein just a man of his time wanted to do something great, to revive dead flesh but he created a pathetic monster, the only literary zombie in my opinion.

Then the payback-is-a bitch-law: "Ye who dabble beyond what is deemed proper, boy will you be sorry!

So maybe Gothic fiction, real Gothic fiction--not paranormal romance with racy bits, should have within the storyline things other than spooky castles and dusty crypts. There is some sort of morality play going on.

The Gothic fiction that I admire challenges the reader in my opinion, to think, to be pulled into the characters' world. Great fiction should leave us ruffled, affected and sometimes even disturbed. At the very least it should make us feel something. For me, the theme of good vs. evil must be present somewhere within the story, or guys--if it isn't it just ain't GOTHIC. 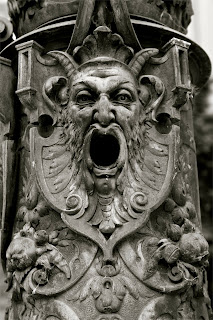