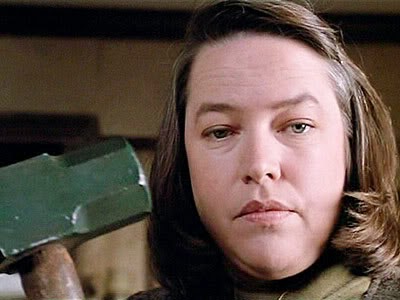 The fan from hell, the fan/stalker lunatic that is the stuff of nightmares. And when the writer is Stephen King, that nightmare is almost too painful to get to know. We feel his pain!

He was, I read, inspired to write Misery by a real encounter which unnerved both him and his wife. He has written about it and it makes for scary reading.

The novel was somewhat different from the film, but that doesn't dilute the power of the movie. A best-selling author with a very popular fiction series gets saved by one Annie Wilkes. She really does save his life before trying to kill him. She carries him away from certain death. Her nursing skills her exceptional but then there's this crazy side to her. It is chilling as it is slowly revealed to us and to her injured patient.

Paul Sheldon, her injured patient soon realizes his predicament. His caregiver is as crazy as batshit. We can see him trying to interact with her by not saying the wrong thing. But it's not easy, especially when she learns he's killed off her favorite heroine, Misery Chastain! Misery, beloved by millions including this nurse with Munchausen Syndrome!

Yes, he finds some old news articles in her memory lane scrapbook. She was put on trial when patients entrusted in her care died. At the time I saw the film the case of nurse  Beverly Allitt emerged. She killed a number of infants she was taking care of in England. She loved the limelight and smiled for the cameras. I hope a special hell waits for her for all the misery she caused. I think she even looked like Annie Wilkes: 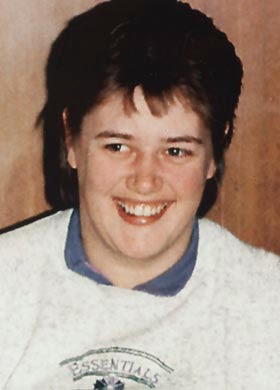 All about her and her horrific crimes:   http://www.biography.com/people/beverley-allitt-17162398#arrest-&-trial

There is no death penalty in the UK but she won't ever be free. I just hope, as I said, that the final punishment is a doozy. Insane or not, I don't care.

Back to the film, Kathy Bates' acting is so powerful that long after her real lunatic self emerges, she is sympathetic. I felt sorry for her when she said how lonely she was and depressed. But at the same time, she was frightening. I don't think that sort of acting is easy to pull off.

All she had were the Misery Chastain novels. She filled an empty life with them just as she tried to fill herself up with food to compensate for all the emptiness. I do recall in the novel, she is shown to be eating a hell of a lot. She comes into see Paul and he can smell food on her breath. That struck me. This is a woman in total control who is totally out of control.

The sheriff and his wife are great. But he is no match for Wilkes. No one knows where writer Paul Sheldon is. It's a perfect murder/hostage situation. Annie's got it made. We can easily imagine Sheldon never being seen again.

In the novel I think she does something a lot worse than breaking Sheldon's foot. Even breaking his foot is horrific and all too real to watch.

One of the most chilling moments is when Sheldon manages to get a hold of a phone which is out of service, shall we say?! It's a prop! If that isn't nuts, what is?

There is a literally a fight to the death, well there has to be. Annie Wilkes is one of the most frightening villains to ever appear in film or fiction. And she's not to be pushed aside or overwhelmed easily.

This film and the novel have always been favorites of mine. I think what makes her so scary is this type of horror can happen. Despite writing supernatural horror, real horror--the horror of an Ed Gein living close by, the horror of a murdering nurse in charge of newborns killing with abandon, fuels my nightmares. Real as opposed to 'can't happen/won't happen' to me, is the most potent of frights.

There is evil out there, yes, it can exist in someone who is declared insane, but it's still evil that results from certain actions. Mourning a murdered newborn when you not only trusted the nurse, but you liked the nurse because she wanted you too, that's evil. That's potent. The results of that horror remain.

In my opinion, the film, got pretty close to the Allitt story for many, and I suppose that's one of the reasons I never forgot it.