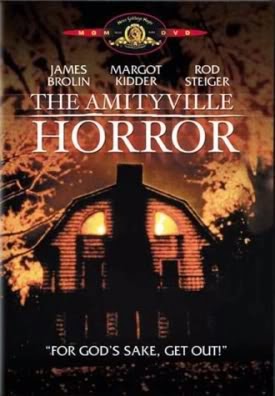 The infamous house in Amityville is at the core of the horror that occurred there. And yes, there was horror. The eldest son blew away every member of his family. They were literally murdered in their beds.

The question arises, why would anyone live there? Would you? I sure as hell wouldn't. But others have and it's their right.

The film purports to tell the horrific story of what happened one night in November, 1974. The film is based on the book by Jay Anson. The book and the films have done well.

What's The Amityville Horror about? We're told all sorts of things but can they be true? What is true is George and Kathy Lutz bought the house 13 months after the murders. They were advised by the agent what had happened there. As a matter of fact some of the DeFeo's furniture was still there.

Things start to happen immeditely and it's pretty scary. We're scared, the Lutzes are scared, their dog is scared. Windows suddenly slam shut, there are flies from hell and the priest, simply trying to bless the house, is nearly driven insane.
Lutz, played by James Brolin starts to look like Butch DeFeo, the killer son. He wakes up every night at 3:15 am ( the time the murders occurred). He starts acting up and seems to develope a particular fondness for an axe.

The Lutzes eventually beat it the hell out of there. Who wouldn't?

So what's the story with the house hoax or no hoax?

This, from LIVE SCIENCE.COM:

Eventually Butch DeFeo's lawyer admitted that he, along with the Lutzes, "created this horror story over many bottles of wine." The house was never really haunted; the terrifying experiences that the Lutzes described, and that were later embellished by Anson and other writers, were simply made up.


There are actually a string of people who lived in the house over the years who didn't flee in the night, but who stayed and reported nothing unusual every occured.

List of owners, including the DeFeos up to present


By the way, the address (112 Ocean Avenue) no longer exists and the house has been remodelled so that the distinctive 'half moon' windows in the rear are no longer there. The curious are not welcome at the property and I can understand why.

What do I think about it all?

From my own personal feelings I would never live in a house that had a mass murder. I just wouldn't. It would bother me too much. I also believe that evil leaves something behind and if this wasn't evil, this mass murder, I don't know what is.

If the whole thing was a hoax to make money, I think that is pretty immoral. Of course we can say that even if that was the intention, that doesn't mean that some sensitive people won't feel something inexplicable within the property.

What I would like to see is the victims of the massacre remembered as victims and not used in any way for any purpose other than to be remembered. The images below are of the parents and the murdered siblings. Butch DeFeo is pictured sitting alongside those he killed. 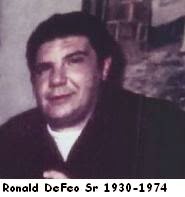