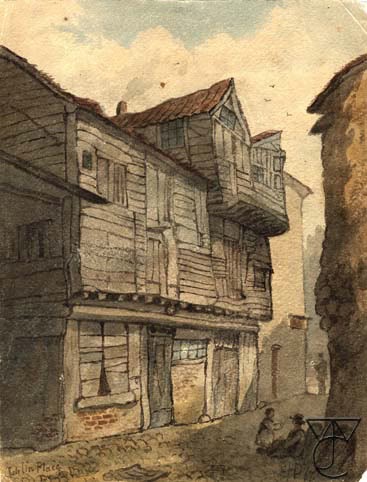 Eco, the demon's arrival in London.

"London had changed in nearly three hundred years, for that was when I was last there. It was bigger, noisier, and although Death was less evident than in the plague days, he still reigned supreme. I saw him and we acknowledged one another.

“There will always be a place for me,” he said. He was right, I knew, what with the great overcrowding and so much filth. Animals were herded through the streets on the way to slaughter houses, great droves of them making a weird cacophony of noise as they went along.

How the place stunk! Excrement all over the place, although it wasn’t as bad as I remembered. Still, there would be another major outbreak of plague but not for some decades.

The taverns along the waterfront were full to capacity. Despite this, I managed to get a room—a flash of money and the landlord was groveling before me.
“Yes, sir. Anything you require, just ask!”

I did. I asked for two whores to be brought to me. They looked to be in a good state. Good enough to feed on, that is. One was young, about sixteen, the other at least thirty.

They were taken with me and started at once trying to entice me. But that wasn’t what I was interested in. It wasn’t their sexual favors I wished. I just wanted a good feed.

Lusty wenches, they were not opposed to some nibbling; however, when my biting grew aggressive and I began to really feed, they put up a fight.

They were easy to subdue though they fought hard for their lives. No, I wasn’t in the mood to create anything; I fed until they were drained and white, whereupon I devoured their flesh, Rose. I had a liking for it, a terrible habit I had acquired in Ancient Rome, if you remember.

I dumped whatever remained of them in the river. What’s another bundle of bones and hair to fall into that convenient body of water, I thought?

Feeling at ease, I decided to take a walk. I wasn’t going any place in particular, when I happened to notice people pushing past me as if in a great hurry to get somewhere. A lot of them too, all rushing in the same direction.

Something was happening for I heard screaming and shouting. I hurried to see what all the noise was about.

I saw them swarm, their numbers adding to a crowd of people shouting abuse at a woman. They accused her of being a witch.

In no time, they began to hurl missiles—sticks and pebbles, and whatever they could find to pelt the woman with.

The object of their hatred shouted and pleaded for mercy. Suddenly, a woman darted out from the crowd. “Stop it! Stop it!” she cried.

She looked so passionate and beautiful; I could hardly take my eyes off of her. The most startling thing about her was her appearance. Rose, she could have almost been a twin of the countess. But it was not she. This was another sort of creature altogether. Yes, creature, for she was a vampire.

A man emerged from the crowd and tried to take her back with him, but she would not go. That man was Louis! There he was, Louis and his vampiric woman.

I spotted the children at once. Yes, Rose, I saw Ada and Simon, the ageless porcelain dolls that are your own children now. They looked frightened then.
What strange vampires they were, I thought, for they seemed more human than vampiric—still, I could tell. Demon spawn such as Louis and myself…we can always tell.

Louis hustled them all away, although the exquisite vampiric woman tried to stop him. She wanted to help that other woman, I think.

He pushed her hard and said something about the children, wherein she agreed and they hurried away. Of course, I followed along..."

Book 3 of The Blackstone Vampires Series. Rose and her children's ordeal continues. They are still held captive on a ship staffed by vampires, overseen by the demon Eco. Eco claims to love her and has penned a confession of all of his sins. And so there are more blood-drenched confessions to read. Rose has no choice but to finish the journal. Eco, mad and as unpredictable as ever, can snap at any time. But will he?


The rest of the journal tells of the sick and twisted obsession Eco has had for Blackstone House's former mistress, evil and debauched Eve Darton. There are aristocratic devil rites, both in England and France, including satanic sacrifices. There is the Great Fire of London 1666, plagues, vampire destroyers, witch hunts and resurrection men who supply a necrophile doctor.

Dracula is introduced, as is a child cruelly orphaned by the vampires. Dracula, the child’s dying mother says, has cursed her daughter and pleads with Rose to take her. Rose does, but what hope can the hopeless have?

Editorial Reviews
' 92 Horror authors you need to read right now'
Carole Gill -- the Blackstone Vampires series
~Charlotte Books EXAMINER
.
"In the attempt to find the just measure of horror and terror, I came upon the writing of Carole Gill whose work revealed a whole new dimension to me. The figure of the gothic child was there. Stoker's horror was there. Along with the romance! At the heart of her writing one stumbles upon a genuine search for that darkness we lost with the loss of Stoker."
Dr. Margarita Georgieva ~ Gothic Readings in The Dark