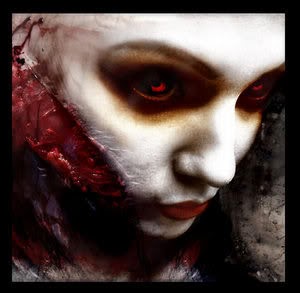 What is serious horror? I’ve been thinking about this. I think it’s horror that goes back to basics, back to the starting point, back to why it was termed ‘horror.’ The time when monsters were depicted as monsters and vampires as the blood- feeding demonic creatures they are. That is not to say there can’t be room for expansion because there can be.


In my view, vampires differ as humans do. However, being vampires they face a dark existence; as dark as the night shadows they dwell in. If they are not intrinsically evil, they are tortured because they know what they are. They cannot enter a church or be turned back into the human being they were. This causes them to suffer, which in turn causes them to have complex emotions and reactions to the world around them–both the living and undead ones.

There is this, though; horror is a broad church and there is room for much experimenting. It only enriches the genre. I, however, am a pretty passionate person by nature and feel I am on a mission to go back to what I see as the roots of horror; in the case of much of my fiction, the core values of darkest horror which I enjoy portraying. I’m not without humor though, dark as it often is. This I have done more in my short fiction.

I do recognize that readers change over time and what they like changes. That is why there is much romance (albeit twisted as hell) in my longer fiction. Even if vampires are heroic and sympathetic, I still depict them as needing to subsist on blood. A creature who lives on blood is not Goldilocks. It’s either a vampire bat or a vampire, that’s what I think.

I see a great deal of dark sexuality too within the vampire’s existence. They feed and lust after one another and the living too. As Dracula says in my novel, The Fourth Bride, “there is pleasure in the blood…” He means sexual gratification. If that is shocking, it is shocking. But it is also being true to horror. Horror is horror. I’m not talking about paranormal romance. HORROR is DARK or it would not be called horror!

Now, that doesn't mean that every single thing I write is seriously dark, it isn't. I have darkly comic and comic fiction out there, there is funny to gruesome in Carole Gill's House of Horrors and Circus of Horrors also, but to a different degree.

*I still experiment. I'm doing that right now in a project I took on. I'll be blogging about that soon.