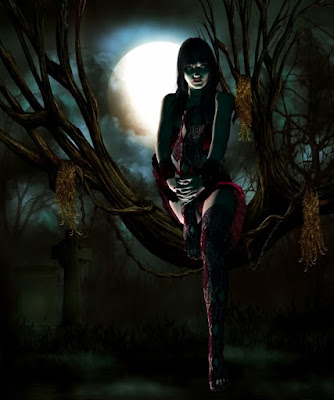 "Biding my time or not, I was furious. Rage flowed through me like an angry sea. I was so preoccupied with Oriani and his family having left Paris, I didn’t care if I was seen when I returned to the crypt.

As it happened no one was awake. I had just made it as the sun was starting to rise. I hurried to my own coffin. My mind turned over what had happened. I wondered where they had gone to in England. It wasn’t that far I knew. Someday somehow I’d get there. Gascoyne would be fairly easy to manipulate I was certain of it. I’d employ seduction.

This pleased me, this way to control another and a vampire at that! Something I had never felt before coursed through me. I thought of Gascoyne and smiled. He was handsome enough; it wouldn’t be unpleasant to have sex with him. As I lay there I imagined how I would feel as I recalled the shape of his lips and his eyes. They were large and black. His skin was the color of cream—all vampires are pale, but his was tinged with something else, just a hint of tawniness. It could have been from a recent feed, I wasn’t certain.

If I had power over him I’d first have to defeat that bitch of a vampire, Carmen. I recalled all too vividly the feel of her slap, the sting of it but at least she feared me now. I was lying in my tomb when I heard something. Someone was moving about the crypt. I heard it plainly; footsteps and the rustling of fabric. I was on my feet in a moment. I didn’t see her at first. Then I saw movement in the shadows. She must have felt my eyes upon her because she turned quickly.

I grinned when Carmen gasped and fled into another chamber. There were many I knew, though I hadn’t seen the whole of our dwelling place, I knew it to be vast—full of tunnels and passageways. Gascoyne said it had been that way from ancient times.

We both could move fast, but I outran her and was upon her in a moment. I said nothing; I only sank my teeth into the back of her neck. She fell, paralyzed. I let her lie there staring wildly, her eyes pleading. She even begged. I said nothing. Not a word passed between us. In fact there was no sound; just the noise of me sucking her dry.

I fed viciously and voraciously. Her blood tasted of wine. I was able to tell what her last feed was like. I saw images of her living life—a life spent in poverty and want. I saw her death too yet I felt nothing. And when Gascoyne raised her I felt jealous.

When she was drained, I tore her head off. It wasn’t easy, but I managed. I flung it against the wall where it rolled a few times until at last it came to a stop. Her eyes were half open; just starting to glaze over.

I knew the others were up, I had heard them—even when I continued my savagery. Clearly Gascoyne was not among them or he would have stopped me or tried to.

So he was there now. I turned and smiled madly at him. “What do you want?”

He looked horrorstruck. The coven looked frightened. He wasn’t. He was angry if anything and shook me. “How dare you!”

I only laughed. “Bitch!” he cried. He pushed me so hard I fell over backwards. Still I laughed loud and raucous cackles for I was extremely pleased with myself. “I’d do it again.”

That did it. He moved so quickly even I was surprised. His slap was fierce. “Is that the best you can do?” I asked.

He reached over to pull me up but only succeeded in tearing my gown from me. I saw his eyes sweep across my naked breasts. Then taking some of Carmen’s blood from my chin, I smeared it on both my breasts.

We eyed one another there in the company of the coven. There wasn’t a sound. I sat there waiting for him, smiling at him. He was upon me in a moment but there was nothing sexual about it. He was too angry.

The coven had moved closer so as not to miss anything. I was stretched out when he tore at my hair, bending my head backward, he sank his teeth into my neck. But then he stopped himself. Instead of biting he was kissing me and fondling me at the same time.

I stretched out waiting for more. He began to lick the blood off my breasts then-- Carmen’s blood. I laughed while he did..." 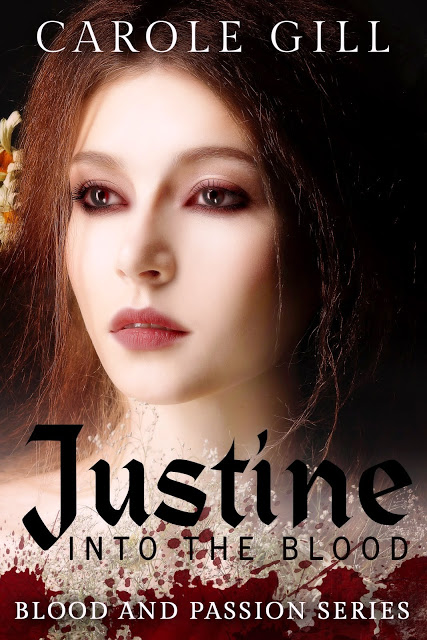 A vampire prince and a beautiful Parisienne meet in the 18th century City of Light.

Born in pre-Revolutionary France and orphaned as a child, Justine Bodeau is taken in by a family friend who employs her as a seamstress. Eventually, she winds up to work in the court of Queen Marie Antoinette. A strong-willed survivor, defeat does not occur to her. When she fights off an attack by an aristocrat and kills him, she is given refuge but is soon betrayed and winds up on the streets of Paris, where she is attacked and killed by rogue vampires. But for whatever reason, love will not let her die.

Justine goes from wishing to be destroyed to wanting to survive, when she feels passion for the one who brought her back, Gascoyne — the one they call the Vampire Prince of Paris.

Justine - Into The Blood is a powerful story of betrayal, passion and revenge in 18th century France and England.