Murder, Mayhem and Cannibalism. But Why?

I want to give some in-depth background to the lunatic characters that make up this circus troupe. Well, the clowns were deliberately abused as children, they were burnt with cigarettes and scarred so badly, they tried to hide from the world. But as they were doing that, they were becoming more and more antisocial, shall we say? They would, as adults, take that pain out on the world.

If it was impossible to zero in on their abusers, then they just stored that hatred up and waited. While they were waiting, they met a carny clown who taught them all about being clowns. He showed them the make up, how that pancake hides everything. He advised against keeping it on too long because the pores had to breathe which most of the time, they ignored.

The three of them were together by this time so it was a communal lesson. It did help them to wear the mask. But the rage and terror that was within them remained.

One of them, Happy said the best he could do was not to kill people. That's pretty sad. Sad, but true as they say.

The cannibalism just evolved of itself. It became part of the ritual of killing. Murdering one's enemies was not enough. Consuming them was better (to the clowns' way of thinking).

Baby Alice, the fat lady, felt as they did. Although, not filled, initially with rage, she just came to like the taste. Al, her boyfriend (one of two murderous midgets), was appalled by it as was his friend, Hank the other homicidal midget.

Now Al and Hank weren't as insane as the clowns, although they did make extinct their tormentors. Teasing they did not take, especially if it hurt their feelings or those they loved.

Cannibalism is nasty even for a horror novel, one thinks of Jeffrey Dahmer in real life and Hannibal Lecter in fiction. Now I don't know why Dahmer crossed over into the big 'C' territory, but I do know why Lecter did. In Hannibal Rising, Hannibal and his little sister are captured by Nazi collaborators. He witnesses her cannibalization. That, I think, pushes him over the edge and the only way he deals with enemies after it is to do to them what was done to his sister.

My monsters have reasons for what they do. We can agree with them or not, but those reasons are there within the storyline.

There's a great deal more to the novel. There are horrific secrets that are uncovered at last; secrets so horrible those that held them refused to remember them. Still, the reader won't forget. Oh, no. The reader will witness everything.

Did I leave anything out? Sure as heck did. But it's all there in the novel. I've chronicled everything. I felt I had to. See, they live in my head. Am I crazy? Maybe. But it's a great release!

"The circus you really don't want to join." 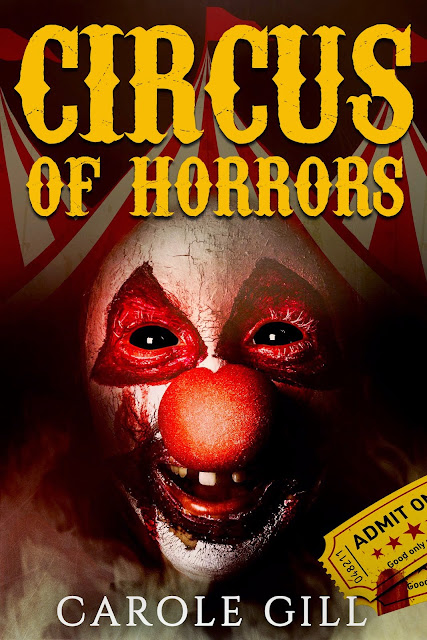