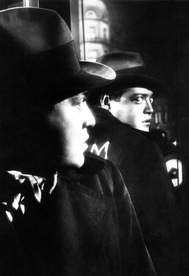 The classic Fritz Lang 1931 film, ‘M’ is about a child murderer on the loose in Germany. Peter Lorre’s performance is unforgettable as is the film. But is the film based on the real murders committed by Peter Kurten?

Kurten served eight years in prison for strangling a ten year old girl. He was released in 1921 and returned to Dusseldorf where he began the series of crimes for which he is best known. From February 1929 through November 1929, Kurten went on the attack and viciously murdered six people.

Then in early 1930, Kurten began a series of attacks with a hammer. None of his victims died. His last one reported him to the police.

Kurten confessed to nine murders and seven attempted murders and in April 1931, he was convicted and sentenced to die by guillotine.

"I had a small but sharp pocket knife with me and I held the child’s head and cut her throat. I heard the blood spurt and drip on the mat beside the bed. It spurted in an arch, right over my hand. The whole thing lasted about three minutes. Then I went and locked the door again and went back home to Dusseldorf."

Kurten was a child murderer. He was obsessed with blood and wanted to know from the executioner if he would hear his own blood flowing upon decapitation.

It’s likely that the film certainly might have been inspired by this mass killer. Its release was timely to say the least. In a place where these sorts of killings occurred, it is natural for the question to be asked, ‘Who will save the children?’ Shadows can be lethal. Predators hide in them. Danger is all around. What can parents do? Even the most vigilant might be defeated by evil’s cunning.

At the start of the film we hear whistling and it is ominous.  Something wicked this way comes from the very first shot when we see children playing and singing, setting the scene. There is even a sign asking, WHO IS THE MURDERER?  A little girl doesn’t know it, but Hans Beckert (Peter Lorre) is about to kill her. We see her and fear for her. We also pity her mother who is busily making dinner. Tragedy is going to strike that we can only bear witness to. Though a film, it is uncomfortable.

I think both Fritz Lang and the screen writer Thea von Harbou (Mrs. Lang) effectively made this film to reflect that awful time in the wake of the child murders when parents feared for their children while other families’ mourned theirs.


What makes the film memorable is the killer’s pleading to be caught in letters he writes to the press. This gives more of a dimension to the killer, one I don’t think applied to Peter Kurten. We can hate, condemn and fear the killer in ‘M', but we see a disturbed man driven to kill. It’s almost not his fault. Still, the crimes must be punished and the killer dealt with.

Lang shows how it is in the ‘nonviolent’ criminals’ interests to have this fiend caught. The streets are full of police and a hard working pickpocket is unable to make a living!

For me, the most effective scene is when someone writes on the killer’s back the letter, ‘M’ – that’s it. He’s been identified. It’s the mark of Cain; it’s going to lead to his downfall, his capture. He sees the reflection and even though he wants to be caught ostensibly, he is terrified.

Early German cinema was so innovative. There could have been so much done—but sadly both for humanity and art—those films would have to wait until rationality returned to the land.

It’s interesting that a murderer can terrorize the population—picking off its most vulnerable members of society—the concept of who is vulnerable may differ but really any human being singled out for whatever reason is vulnerable. Vulnerability only differs in the eye of the predator as predators indeed differ.

If you have never seen ‘M’ make sure you do, it is well worth seeing in my opinion.