Circus of Horrors Is Coming Soon! 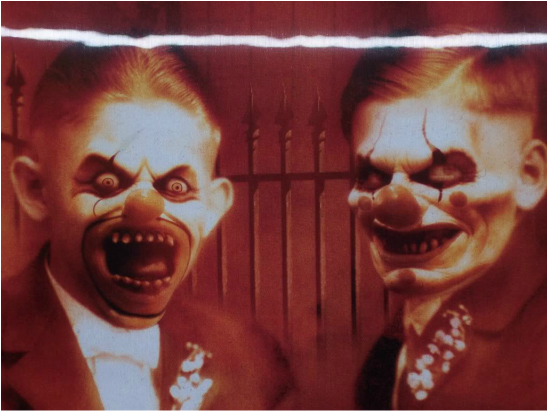 These two started it all! Yes, Al and Hank--special people in a very special circus!


"The vehicle was a beat up well-travelled 1929 Ford school bus. It had been painted a bright red and said ‘Fred Dodger’s Circus’ on the side. Amid peeling paint, the image of ecstatic clowns was a bit pathetic looking. Curtains hung on each of the windows. Baby Alice had sewn them; now she sat outside with her pals waiting for the meat to be cooked.

None of the troupe disliked riding in the bus or camping out in tents. The weather occasionally made it difficult for them, though. Once, near Tupelo, Mississippi, the bus had to be dragged out by the pickup. The manager had extensive experience in such matters and everyone was grateful he did.
Fred Dodger loved his people and looked after them very well, and they knew it. He had explained about leaving them to go to town in order to get some money. They said fine and decided to have a cook out.

Any car or truck driving past would have been amused at the scene. Clearly, they were circus people—carnies—with the clowns in full make-up, Alice who weighed just under four hundred pounds, and Hank and Al, both 3 feet tall.
Hank got to arguing with Al about the progress of the meat being cooked. When it was at last ready, Al served it up. The old man got his first out of respect. He dug right in. Baby Alice did the same, as did the clowns. Al and Hank had a salami they swiped from a deli. They weren’t going to eat what everyone else was eating. They weren’t cannibals..."

Watch this space! It's coming!
Next update THE COVER!