Invasion of the Body Snatchers (1955): Classic Sci-Fi But Also Timely! 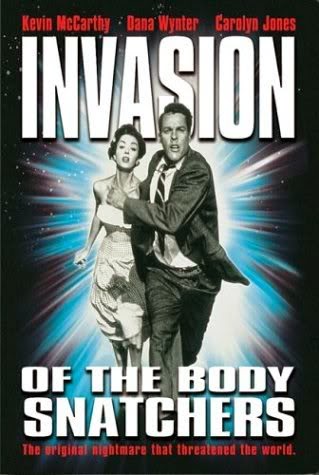 Invasion of the Body Snatchers is a classic sci-fi film that may be more than it seems. Hang on, I'll get to that in a moment.

So what is it about? Dr. Miles Bentell returns to his small California town and discovers something is wrong. People are coming to see him in dire need of valium or something stronger! Even his girlfriend, Becky Driscoll is upset about her cousin, Wilma thinking her uncle Ira isn’t her uncle! The fear is mounting and just when we want things to happen and for it all to be fixed, everything’s okay! Wilma laughs and says Uncle Ira is fine.

Her uncle is smiling and smoking his pipe, looking like something out of a Norman Rockwell painting. We’re supposed to be relieved—in fact, we are a bit relieved. Perhaps Wilma had a bad dream or imagined something…But wait! The paranoia begins to spread. A boy is terrified of his mother, no soothing in the world helps but then, he’s okay.

Next up are pods--like giant sea pods they’re described. They seem to be all over the place, brought to your house by someone you know. Well, someone who knows you and wants you to CHANGE! Becky’s father is one of THEM.

THEY’RE EVERYWHERE!
Picture if you will Miles when he understands the horror that is taking place in his town.

"Mr. Mayor: I have a list of 134 people that are no longer human beings, but are alien pod people come to earth—they are working and living among us…they must be rooted out or they will take over!"

No, that line is not in the film—but that’s where I see a connection with politics. The film could almost go there. It was made in 1954, a very scary time.. There had just been The Army–McCarthy hearings which were a series of hearings held by the United States Senate's Subcommittee on Investigations between April 1954 and June 1954. Senator Joseph McCarthy was the guy with the list of those people he said were communists.

The novel, by Jack Finney was serialized by Colliers magazine that very same year and the film followed.

I happen to think the author was inspired by current events to write that novel. After all, there was a climate of fear. Some of it quite justified. There were spies in the U.S. and abroad. In time, McCarthy lost any credibility he might have had when he started. There is that famous interchange between him and Special Counsel to the Army, Joseph Welch where Welch asks, “Have you no decency?” McCarthy’s charges were baseless as he had accused a highly regarded member of Welch’s own team, hence the question and the memorable interchange.

Let us remember Hollywood had already had its purge—and whatever your beliefs, I think we can easily imagine what the fear factor felt like.

The novel has everything. There is conflict—the pods, the strangers (where are they really from), the discovery by Becky and Miles of a huge farm: PODS R US. They are on the run and so fearful of falling prey to this terror.. Suddenly, they hear the most beautiful music. They are hopeful. But it doesn’t last because as they approach this supposed haven with the beautiful, spiritual music, they discover it to be a huge pod depot! It's like an Amazon warehouse but for pods!

They take flight. Will they make it? I am not telling you just in case you didn’t see the film. I can say that the last scene is superbly jolting. It ties everything up and is most unsettling.

But here's the thing: can fear be a good thing? Should people think about what’s happening around them periodically and assess whether it is a good thing or not? What if a similar film had been made in the 1920’s and shown in Germany? I’d have liked that. Maybe it would have been really good if the people became highly suspicious of what was happening around them and questioned who looked likely to take over some day.

Just a thought. What do you think?