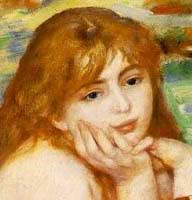 I think we can find horror in the least likely of places. There is great darkness in Robert Browning’s Porphyria’s Lover. It is a tale of madness and murder; a tale offering so many interpretations it will obsess you!

One important note: porphyria is a disease but it was not identified as such when the poem was written.

Robert Browning wrote one particular poem that I find to be haunting! It is not only a work of dark beauty, it is also a puzzlement, you turn it one way in your search to unlock its awful secrets and just when you think you’ve solved it, you discover another explanation for its meaning, all of them valid.

Porphyria’s Lover is a poem that was first published as "Porphyria" in the January 1836 issue of Monthly Repository. A possible inspiration for the poem is John Wilson's "Extracts from Gosschen's Diary", which is based on a lurid account of a murder published in Blackwood's Magazine in 1818. Browning's friend and fellow poet Bryan Procter acknowledged basing his 1820 "Marcian Colonna" on it, but added a new detail; after the murder, the killer sits up all night with his victim.

You will see that in this poem as well! Excited? Well, here we go:

The rain set early in tonight,

The sullen wind was soon awake,

It tore the elm-tops down for spite,

And did its worst to vex the lake:

I listened with heart fit to break.

When glided in Porphyria; straight

She shut the cold out and the storm,

And kneeled and made the cheerless grate

Blaze up, and all the cottage warm;

Which done, she rose, and from her form

Withdrew the dripping cloak and shawl,

And laid her soiled gloves by, untied

Her hat and let the damp hair fall,

And, last, she sat down by my side

And called me. When no voice replied,

She put my arm about her waist,

And made her smooth white shoulder bare,

And all her yellow hair displaced,

And, stooping, made my cheek lie there,

And spread, o'er all, her yellow hair,

Murmuring how she loved me — she

Too weak, for all her heart's endeavor,

To set its struggling passion free

From pride, and vainer ties dissever,

And give herself to me forever.

But passion sometimes would prevail,

Nor could tonight's gay feast restrain

A sudden thought of one so pale

For love of her, and all in vain:

So, she was come through wind and rain.

Be sure I looked up at her eyes

Happy and proud; at last I knew

Made my heart swell, and still it grew

While I debated what to do.

That moment she was mine, mine, fair,

Perfectly pure and good: I found

A thing to do, and all her hair

In one long yellow string I wound

Three times her little throat around,

And strangled her. No pain felt she;

I am quite sure she felt no pain.

As a shut bud that holds a bee,

I warily opened her lids: again

Laughed the blue eyes without a stain.

And I untightened next the tress

About her neck; her cheek once more

Blushed bright beneath my burning kiss:

I propped her head up as before,

Only, this time my shoulder bore

Her head, which droops upon it still:

So glad it has its utmost will,

That all it scorned at once is fled,

And I, its love, am gained instead!

Porphyra’s love: she guessed not how

Her darling one wish would be heard.

And thus we sit together now,

And all night long we have not stirred,
And yet God has not said a word!

I don’t know about you but I find the poem dark and deeply disturbing.

The themes I see are madness and murder, the death by strangulation of a beautiful young girl by her deranged lover.

There is a storm raging and Porphyria comes into the room where there isn’t even a fire.

Her lover has been sitting there, what in the cold? And if so why?

She sits down next to him and speaks to him although he doesn’t answer her, I see her as then trying to play up to him a bit by putting his arm about her waist.

She bares her shoulder; she then snuggles up to him so that his cheek is on her hair.

He knows she is his and just at that moment he strangles her, carefully assuring the reader that she felt no pain and that she smiled.

R for rationalization, I say!

He goes on to tell us she never cried out! Hard to I think when one is being strangled.

I imagine him possibly also thinking: “At least I hope she had no pain...”

He’s killed her, she’s dead so what does he do?

He opens her blue eyes and is pleased ‘they don’t look ‘strained.’ He then spreads her hair about her neck and gives her a ‘burning kiss’ (?!)

He then goes on to tell us he props her head up and lets it rest on his shoulder.

And if this isn’t weird enough he lets us know that he sits with her corpse.

But it’s all okay apparently because ‘...God has not said a word!’

I warily oped her lids: again

Laughed the blue eyes without a stain.

And I untightened next the tress

About her neck; her cheek once more

Blushed bright beneath my burning kiss:

I propped her head up as before,

Only, this time my shoulder bore

Her head, which droops upon it still:

So glad it has its utmost will,

That all it scorned at once is fled,

And I, its love, am gained instead!

Porphyria's love: she guessed not how

Her darling one wish would be heard.

And thus we sit together now,

And all night long we have not stirred,

And yet God has not said a word!

I mean I like to think of myself being as religious as the next person but what does Porphyria’s lover think, does he really believe God would have made his displeasure known by telling him?

It may be of some interest to know that in Browning’s My Last Duchess a woman is also killed by the man who loves her.

Pardon my glibness but I wonder what Elizabeth Barrett Browning thought of these works.

I do agree that there are many valid interpretations; I however feel that Browning was writing about a madman who rationalized the murder of his lover.

He does this powerfully having us witness all of it through the murderer’s eyes. I find that very moving indeed to see what Porphyria’s lover saw, from his own point of view.

I also then see a deliberate choice by Browning to call the poem, Porhyria'sLOVER as it is her lover who extinguished her life, motivated by his own mad reasoning.

So in essence, Bronwning, I think, has us witness the murder of a beautiful young girl who might have only chosen to love the wrong man. A man who after killing her is still so drawn to her, so obsessed by her that he sits with her corpse by his side, unable or unwilling to let her go!

One wonders just when he does let her go.

I do not see an end to this poem either, but a terrible continuation because somehow in my writer’s imagination I see him sitting there still, in a cold, darkened room for there is no longer a fire—chilled but happy to be near his long-dead Porphyria.

But along with this I hear the sound of a battering ram. I hear too the wood splitting apart as the door is being broken down and the terrible secret of Porphyria’s Lover is about to be revealed!