ALL PACTS LEAD TO HELL 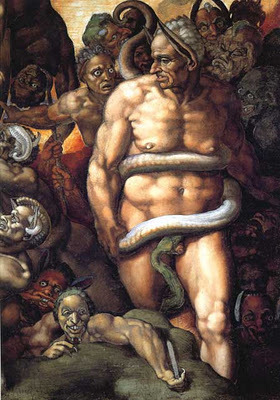 This post inspired the novel, Unholy Testament - The Beginnings. It is a recollection by Eco, the demon, of the infamous Gilles de Rais, who rode with Joan of Arc but had a secret life. The novel is on sale for 99 cents.

"It is I your servant Eco once again with an accounting of the final judgement of a certain man that I myself witnessed--an individual who dishonestly made a pact with Satan.
By the way, if there are any apologists for this man then I can only say this: I heard his confession from the man's own lips.

Gilles de Rais was his name, former aide to Joan of Arc and a notorious child murderer. His castle and its grounds were filled with the mutilated remains of children savagely killed.

Children had in fact been vanishing for years but nothing was done.

You see at this time in France a noble could rather do as he wished as long as peasants were the only ones being victimized.

De Rais used his servants and cousin to snatch the objects of his sexual depravity whenever he liked. Still on occasion he grew bored.

At such times he'd over spend. He was very extravagant and regularly found himself in need of money. Like so many at the time he believed alchemy was the answer to money worries.

He was told of a famous sorcerer who could turn water into gold. That is what drove him to contact the renowned Francois Prelati.

Prelati was more than willing when he saw de Rais' opulent lifestyle.

"Of course it is possible," He said. "However in order to do this my lord—a demon must be summoned from hell and in order for that to happen I will have to write my spells in a book using the blood of children!"

The corpses of children were never far and the request was cheerfully granted. Prelati was given more than enough children's blood with which to write the book of spells for the summoning. He was also given other assorted grisly items for sacrifice.

Prelati was pleased. "Now for the final requirement--the pact. You must hold a parchment wherein you have stated your pledge to give Satan your soul!"

De Rais agreed and the ceremony went on.

What Prelati never realized was de Rais had stipulated he would do anything, but he would not give up his soul!

The cheek! I mean really!

I find that rather distasteful though I am of demonic origins myself. But one has to recognize truth when one comes upon it.

Eventually, de Rais was arrested for something else entirely--the child murders were discovered accidentally. The result however was a trial.

Satan and I saw him during his trial. We were passing ourselves off as Papal Emissaries which was rather fun.

The court was incensed by de Rais' contempt. He was hostile and condescending.

When the court adjourned for a two day break, Satan and I visited him.

During those two days both Satan and I spoke to him. A great deal can be accomplished under such circumstances!

When court resumed he returned contrite and pled for his entry back into the church. He confessed and said his one desire was to face his death bravely.

Any nobility he had lost he was intent on recouping.

He did of course foolishly believe the clerics who said he was forgiven and would enter heaven!

You see they may believe that to be the case but in the last analysis it is up to the old man there and we all know God isn't a push over.

If you think God forgives all manner of sin then take another scan through the Old Testament.

I know where of I speak. I am the son of a fallen angel and let me tell you right now, there are those who immediately regretted siding with Lucifer and sought forgiveness. Their answer was eternal damnation, not forgiveness!

When the end came, I saw de Rais go bravely to his death. He wished to set an example to the others who were condemned with him: his cousin and some servants. Prelati managed to get off with his life but that was only temporary.

As for de Rais, Satan and I were there to greet him when he reached hell.

"It is you!" he cried when his eyes beheld Satan.

"Yes," Satan answered. "And now you are mine for it is only right!"

If he looked horrified then he looked worse as the legion of demons began to descend on him--pinching and tormenting him.

"I have been damned!" he cried.

"For all time!" Satan replied. "You see in a way I am God's heavy. I punish those who are not worthy of heaven. But also--!" he added, "I don't like to be made a fool of! Pact indeed, how dare you presume to hold back your soul from me?!"

I winced to see the terrible pain and suffering that began to be inflicted upon this man.

"Yes," Satan cried. "A pact is a pact. There is no going back, no codicils here! Hell is not a court of law, there is no bargaining. Your sins are the currency that earns you damnation!"


'Such is the word of Satan—Lord to all who are damned by deed whether or not they think they shall be.'

-Eco—your servant in Hell.
Posted by carole gill at 9:22 AM