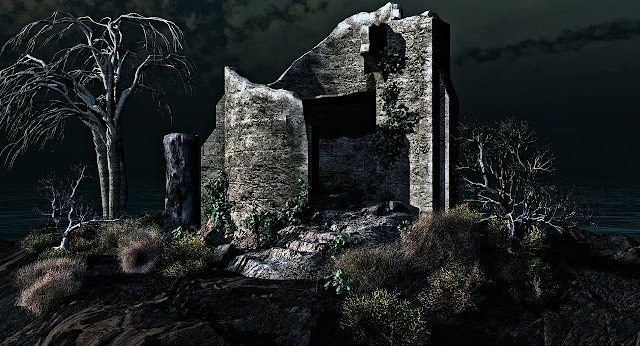 Some families are better than others!

"We are your family, they said. "It's better than no family."

The girl wasn't so sure. She didn't recall her origins but that was because she had been a foundling. A beautiful little child of two left on the doorstep of a church. The thing was, no one from the church, not a priest or nun or even the housekeeper from the rectory found her. The others found her. The ones that were caring for her now.

"We love you, we always have."

"From the moment we first saw you, we agreed amongst ourselves never to harm you."

None of them had ever had children. Some of the females longed for babies to care for, but they were not fertile. Actually, it was more complicated than that.

Vampires cannot procreate. And besides, their master said, "babies’ blood is so sweet, who wants to give it up."

The master smiled at her. He was handsome, she had to admit. That was how she came to be seduced and turned.

“It won’t hurt a bit. Just relax and enjoy the sensuality of it all.”

She let herself go in more ways than one. It was nice. Well, more than nice. It was a life-changing event. She would have to subsist on blood now. That was the yucky part.

Still, there were advantages, it was nice to have aunts and uncles and cousins, all friends. This coven of vampires ranged in age from young children to the elderly. Mainly, the master had received into the fold the lost and unwanted from human society. There were females that had fled violent husbands as well as elderly that had been cared for by their violent children who hated them.

The master had been around for centuries and he still found the ways of humans puzzling. He, for example, as well as most vampires, never harmed animals or humans unless they were in desperate need of a feed.

The forest was full of wildlife they could sup from and really, they reasoned what was the difference between that and hunting?

The most surprising thing about the vampires, the girl found, was they were genuine. They didn’t lie about their feelings. You always knew where you were with a vampire. Vampires don’t talk crap. They don’t string you along or promise the moon like some people and most politicians do. And really, when you think about it, they’re both blood suckers.

The main trade off for immortality was no sunshine, but so what? With the hole in the ozone layer, who cares?

This coven the girl found was socially aware too. They were out most nights helping the homeless.

“Are you cold? Would you like a nice warm place for the night…we have soup…”

They already had an underground complex in the forest. It would become home to many of the lost, the lonely and disadvantaged. And most of all, it was free. No charge to stay. Well just perhaps a bit of what they called life sap. That liquid produced by the human body which sustains humans and vampires, that was always needed.

So remember! Family or domestic problems? Change your life forever! Get real, adjust your expectations. Live forever and stop worrying. Check out a coven near you!