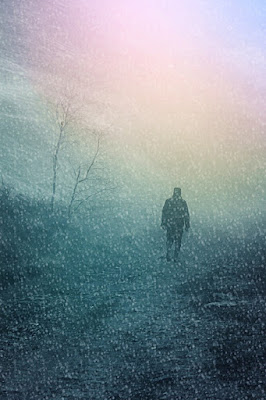 Slowly, I am returning to what I was before my husband died. It's been a very long time for me, and no, the loss of a spouse is not the same as the loss of parents. The only loss far worse is the loss of a child.

I'm going to write weekly posts about things I feel, I am not going to drag anyone down into the abyss I've just crawled out of, believe me.

I think emotion that is strong inspires a writer to write, hence the purpose of these weekly posts.

I watched a film today about Truman Capote and am also reading (again) his masterpiece, In Cold Blood. That inspired me to write a short fiction piece.

Someone said writers are selfish, the same person also said a journalist will kill for a good story.

There was a great story the writer found. Two men were arrested and executed for the brutal, apparently motiveless murders of an entire family. The writer, with a solid reputation, researched the crime and the murderers.

Each of them, killers and author, wanted something out of it all. The writer wanted a book, the killers wanted their lives. They were each predatory in different ways. But we all are, really at least that's what I think.

After a fair amount of angst-filled introspection and a flurry of help from the writer, along with stays of execution, which had to be very hard on everyone, although more than convenient if you have a date with death, the killers were executed, the writer's work was acclaimed and rightly so.

As this is a fictional piece based on the whole matter, I'd like to think what might have happened, here goes:

The writer found himself haunted. He no longer felt alone even when he was alone. There was now a presence. It was like having a ghostlike appendage. Part of him knew something had attached itself to him. There was no doubt about it. It was there. It made him reflective, he was anyway, but now he was even more thoughtful.

There was this need to write. He wanted to at least write some other piece, something to show he still had it. That quality that he had used to such good advantage. The problem was, he was all alone in the world, despite friendships which were pretty superficial. His good friends saw he had lost something of his soul. They tried to help but couldn't.

He'd weep over unfinished manuscripts, over empty bottles of alcohol. He'd lie in the dark thinking and watch the ever increasing light seep in through the blinds. Another sleepless night.

When the murdered family began to appear, he begged them for their forgiveness. But they were good people and forgave, he was right about them initially. They were salt of the earth and all that.
They even thanked him for letting the world know about their sad demise. That really made him cry.

At the end of his life, he was happier than he had been. The appendage had taken over completely and he found himself one of the ghosts. He drifted into their embrace on the last night of his life.
"It's over," he said.

And it was, and that was the way he wanted it.

Being haunted is horrible, so many of us are. Being a haunted writer is even worse because when ghosts are given voices, they become reality. And that's pretty damned scary.