In Cold Blood is that! It's also a non-fiction novel 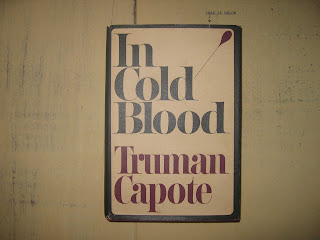 That always intrigued me, 'a non-fiction novel' How can a novel be non fiction. It can, read the book and you will see.

It's not written in a dry way, it's a novel with the pace of a brilliant crime novel. And why not do it that way? Capote trail blazed with this book and good for him, I say!
A book first by Truman Capote, this horrific case was soon made into a film; an exceptional film. The four members of the Clutter family were blown away one November night in 1959 by two drifters. There was supposed to be a fortune they were going to come away with. Dick Hickock was sure of it. He told his friend, Perry Smith about it and the two wound their way to Holcomb, Kansas.

They were told there was a safe there, and they couldn't miss. It was a sure thing. I'm re-reading the book now. It's unsettling to say the least. The depiction of the killers is so sharply done, I felt I was there. The Clutter family are entirely opposite to their killers. As different as evil is from good. Yet, that being the case, I can see, and I think you will too, Capote has given us such a detailed account of the killers' lives and backgrounds, we can understand how messed up they were. Though Hickcock came from a nice family, Smith's background was so dysfunctional, it scarred him. Two of his siblings committed suicide and the other didn't ever want to see him. The suicides were before the Clutter murders by the way.

A homicide detective once told me 'no motive is a motive' . I agree. Supposedly the Clutters were going to be murdered from the start, so as to have no witnesses. I think Perry Smith who actually did the killings hated this family, particularly the father for inhabiting a world he could never know. 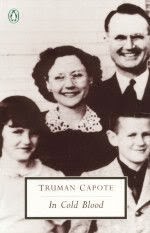 Capote could not have titled the book better, it's 'in cold blood.' In fact, it doesn't get colder or more unfeeling than this. There isn't even the passion of hatred--or is there?

I happen to think there is a lot under the surface. These two killers are from society's underbelly. They see the home and the land it's on. They know they don't come from this world the Clutters inhabit.

There's a lot to resent then. I happen to think it's almost a relief when the first shot is fired.

He's very polite. He was quoted as saying he thought Mr. Clutter was a real gentleman up until cutting his throat. How nice. That warms the cockles of my heart, how about you?

Their backgrounds are sad. I felt a little sorry for them. But then again Robert Blake's acting as Perry Smith is so exceptional, that possibly that had something to do with it. Scott Wilson as Dick Hickock was also excellent, I mean they became the characters.

The film was shot in Holcomb, Kansas and some of the settings are so real, they cause discomfort. The Clutter residence where the murders took place is used. That was painful, but I suppose it added to the hard-hitting realism of the film.

There is a fictitious reporter who is actually a Capote-like character. The investigation is gripping, we want these guys caught. They are and it's a relief, so are their executions at the end. I had the feeling that each knew, possibly for as long as they lived, they were fated for this.

True horror like the mass extinction of a nice, loving family is the worst horror I can think of. I never forgot the film. You won't either, if you haven't seen it, see it. Watch a well-made, respectful re-enactment of one of the worst mass murders ever. You owe it to yourself and you owe it to the
Clutter family.
Posted by carole gill at 11:48 PM