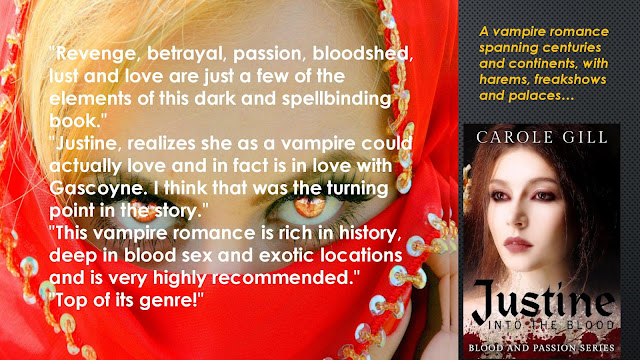 This is not your average vampire romance! It's got all the ingredients but it has more to make it what it is. It's got a sultan with an amazing secret as well as vampires in high-class London brothels.
There's history, sex and lust. Oh, and feeding too because these are vampires!

Come along with Justine, follow her into the blood and beyond! She's a heroine you'll care about, I promise you!

This is best selling at Amazon and today's the last day it is priced at 99 cents!
A vampire prince and a beautiful Parisienne meet in the 18th century City of Light.

Born in pre-Revolutionary France and orphaned as a child, Justine Bodeau is taken in by a family friend who employs her as a seamstress. Eventually, she winds up to work in the court of Queen Marie Antoinette. A strong-willed survivor, defeat does not occur to her. When she fights off an attack by an aristocrat and kills him, she is given refuge but is soon betrayed and winds up on the streets of Paris, where she is attacked and killed by rogue vampires. But for whatever reason, love will not let her die.

Justine goes from wishing to be destroyed to wanting to survive, when she feels passion for the one who brought her back, Gascoyne — the one they call the Vampire Prince of Paris.
Justine - Into The Blood is a powerful story of betrayal, passion and revenge in 18th century France and England.
#vampires #darkpnr #horror

AMAZON
Posted by carole gill at 11:21 AM