READ FIRST CHAPTER FOR FREE. MEET FRED DOGER AND HIS CIRCUS OF HORRORS! 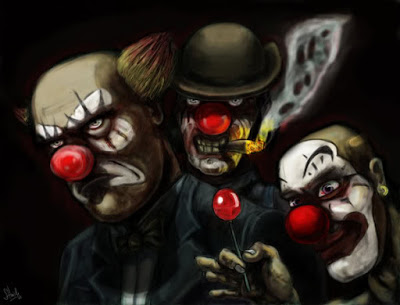 Fred Dodger's Circus has fallen on hard times. They had to split from their last engagement. Yup, another murder. But there are reasons...Actually they're sideshow performers. But they're also badly damaged and vulnerable people. That's what makes them the killers they are.

ADULT HORROR/GRAPHIC VIOLENCE/CANNIBALISM
"The vehicle was a beat up well-travelled 1929 Ford school bus. It had been painted a bright red and said ‘Fred Dodger’s Circus’ on the side. Amid peeling paint, the image of ecstatic clowns was a bit pathetic looking. Curtains hung on each of the windows. Baby Alice had sewn them; now she sat outside with her pals waiting for the meat to be cooked.

None of the troupe disliked riding in the bus or camping out in tents. The weather occasionally made it difficult for them, though. Once, near Tupelo, Mississippi, the bus had to be dragged out by the pickup. The manager had extensive experience in such matters and everyone was grateful he did.

Fred Dodger loved his people and looked after them very well, and they knew it. He had explained about leaving them to go to town in order to get some money. They said fine and decided to have a cook out.

Any car or truck driving past would have been amused at the scene. Clearly, they were circus people—carnies—with the clowns in full make-up, Alice who weighed just under two hundred and fifty pounds, and Hank and Al, both three feet tall.

Hank got to arguing with Al about the progress of the meat being cooked. When it was at last ready, Al served it up. The old man got his first out of respect. He dug right in. Baby Alice did the same, as did the clowns. Al and Hank had a salami they swiped from a deli. They weren’t going to eat what everyone else was eating. They weren’t cannibals.

They spoke while they chewed their salami. “I have to hand it to you,” Al said. “It makes for a perfect solution—cooking them guys the way you did.”

“They deserved it. Didn’t deserve no better!”

“True, but there were three of them. We’re just lucky we didn’t have far to take them.”

“Yeah, imagine them snooping close to us. I wonder what Fred would have done.”

“He wouldn’t have liked their taunts.”

The sailors had insulted everyone. Baby Alice was reduced to tears and the old man had been pushed when he objected to their language. Then they started in on the boys. Yes, boys—despite being 38 and 40, Al and Hank thought of themselves as that: kids, in trouble. The popular Katzenjammer Kids comic duo had nothing on them.

The boys didn’t take shit from anyone. What were three more big mouthed louts to them? Al whipped out his razor. The dispute was settled in five bloody minutes. Where the sailors had been nasty fools taunting those they saw as misfits, they soon became blood-drenched corpses, their throats cut so deep, their heads dangled.

The clowns took care of everything—they cut them up into manageable parts, then basted them with some Heinz sauce, their favorite.

It took all day for the meat to be ready. When they could finally taste it, the clowns were proud and Baby Alice said it was the best she’d had in a long time. Hank made lemonade. It was luxurious, sitting out in the early dusk of a cool June evening.

Most of the meat had been eaten when Fred came back. “Smells good. Any left for me?”

The boys looked at one another. Fred nodded toward his father who was still chomping away on what looked like a couple of fingers. When he walked toward the man, the boys started to worry big time. Snatching a thumb out of his hand, Fred shouted, “Christ Almighty! I warned you guys!”

He had and more than once. Al started to explain about the sailors, but Fred was having none of it. “I don’t like my father eating human flesh! That’s my main gripe. Okay?”

The boys nodded. “It won’t happen again.” They looked sincere. Fred doubted that they were. “Just don’t let me see you do it again.”
Total hypocrisy, but Fred did feel sorry for them.

The old man found it hard to stand. His joints cracked and he shook his head. “These old bones,” he said as the half eaten thumb fell to the ground. Alice glanced at it and giggled.

Fred led his dad toward the pickup. No tent for Old Pa. Not at his age. Fred had a nice, cozy, little box-like enclosure he constructed himself for them both to sleep in, in the pickup.

“I got it all accomplished in town, Dad. Got them checks cashed. We should be fine for a while.”

“I know. That’s why you’re going to be sleeping in a sec!”

His people watched them go. They liked being with Fred and his father. It was like having a family. Better really, considering how they were raised.

Al and Hank grew up in orphan asylums—graduating eventually to mental hospitals. Baby Alice lived with her father who beat her. She ran away to live with a succession of men who did the same. Her best day came when she started to work freak shows as the fat lady. People were nuts, fucked up in one way or another. She made extra money on the side for those patrons that wanted a flash—a buck to flash her naked, oversized jugs and a buck fifty for a feel. If they wanted more, and some of them did, the price went as high as five dollars. That hadn’t happened since Fred hired her.

Besides, she had a boyfriend now. She and Al were a couple. How the two managed it, Fred had no idea, but from the look on Al’s face, he was sure something had been figured out. Over time, a relationship had grown between the two of them. Which was nice, Fred thought. It would keep them both on the straight and narrow.

After tucking the old man in, Fred emerged and gave the clowns an angry stare. “I don’t like the cannibalism. I don’t like it at all.”

The clowns started to argue with him. Happy was the most vociferous. Before the old man went senile, he used to ask him why he let the clowns join up. Fred would reply he felt sorry for them. How do you not pity feel sorry for three men who hide behind garish clown makeup because they know it’s less frightening for people than their own faces?

Each had been cut up and scarred when they were little. They came from an orphanage where they were burned with cigarettes and cut up with razor blades, leaving their faces in horrific condition. They got the idea of the clown makeup from an old carny they had befriended. He taught them how to be clowns and showed them how to cover their scars up. When he applied the cooling pancake, they giggled. Jocko had been their friend until he died. It was through him they discovered the carny life.

“I think we pissed him off,” Noble said, meaning Fred.

“Can’t please everybody.” Danny shrugged.
“What am I going to do with you guys?”

"An awesome little creepfest!"
"Never going to the circus again!" 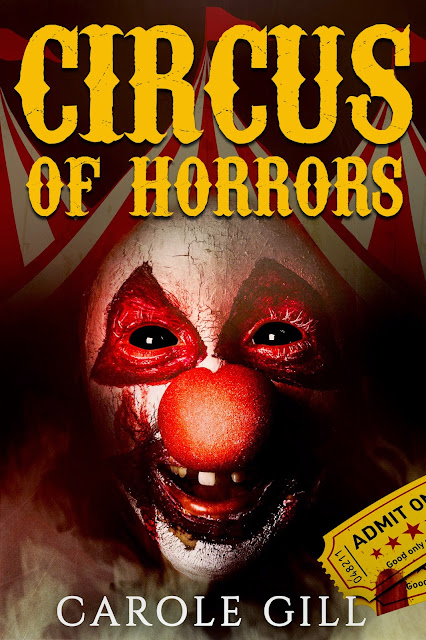