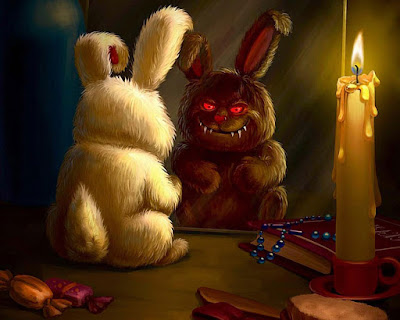 What kind of toys does a Satanic toy maker make? How about this cute bunny? Don't you love it!

"They called him the Great Carelli, master of magick and sorcerer extraordinaire. Carelli was a great showman and if that wasn’t enough, he was also a gifted toymaker. His dolls were much sought after. Sadly they were; sadly, because Carelli was also an avowed Satanist and had been for centuries.

“Bah! Satanism! They have it all wrong! The only true things are the pacts.” He recalled his own, made long ago in a cave in Europe; one of the many gateways to hell. Yes, those are genuine.
“I will serve you always Master!” There’s a hell of a lot of bright light and the shadowy figure of he who was known as Satan.

“Go forth and do my bidding.”

He did and he would. And why not? He’d live forever after all, not a bad trade off as he saw it. Besides, what was a soul worth? You go to church all your life and when you die you’re food for the worms. He couldn’t see it.

There was logic there and Satan was pleased. “You will continue with your pursuits.”

And so he did, but instead of fashioning ordinary dolls he made magical ones; very special dolls he had blessed with his own breath, beautiful dolls to do Satan’s work. Well perhaps not that beautiful, it was the eyes. They looked as though they opened into hell with the glint of madness and depravity. Still, they appealed and that’s what counted..."

ABOUT SOME OF THE OTHER STORIES:

I grew up with horror legends such as King, Koontz, Poe, Shelley, Stoker and I added Gill to that list.
¬C.Gaydas

"There is no doubt that she soars above the endless parade of independent horror authors to shine as a true star in the darkness. With the brilliant anthology House of Horrors she proves why she is a perennial favorite. To put it simply, this is a great assembly of tales anyone would be proud to have in their collection"
¬Joshua Skye
DARK MEDIA 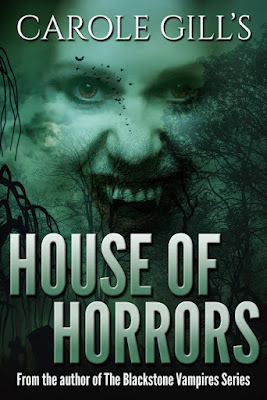