The Blood of the Damned! 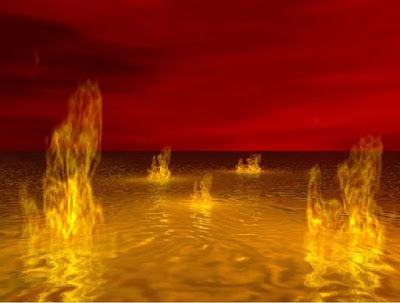 When the world began, the Lake of Fire was merely a thin stream of water that flowed out from hell. Yes, hell was formed when Lucifer fell to earth.

Over the centuries this was to change. Violence and malice brought forth more rivers and streams, eventually creating a bottomless lake in the hot, heart of hell that burned incessantly. This was where the damned were deposited, where they would burn forever. The damned are damned by their own actions and vices. They sentence themselves for their cruelty and sin to burn forever.

That Lake has infused itself into our world. It seeps into tunnels and caves--and even travels through time and space into what is now Antarctica.

And yes, that is real blood in The Blood Falls. Scientists are just fearful of alarming humanity. The blood comes from the damned, those who choose to sin and find they are condemned to the Lake of Fire by their various outrages.

If you are in doubt, you needn't be. If you go to a place where there has been terrible evil committed and if you put your ear to the ground, you can hear the cries of the damned. Those that perpetrated that evil. And if by chance, you are able to touch some of that blood-ice that is supposedly rust, you will fall to your knees screaming, for you feel the pain of the persecuted!

You will know the terrible truth of the Lake of Fire and the blood of the damned, regardless of what scientists tell you!