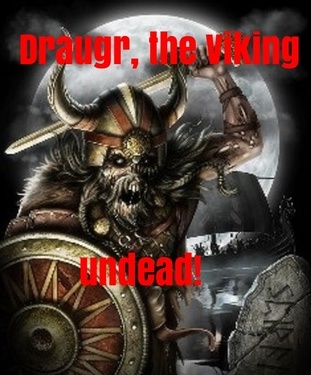 "They rise from their crypts, these disgraced warriors who did not reach Valhalla but were consigned to ignoble burial.


You can see them as they stand atop their burial mounds, sword in hand, for they are still corporeal, though they reek of decomposing flesh and dusty bone.

Their stench, is all pervasive, the rotting corruption of themselves—it alerts all to their passage and the terror this night will bring.

An old man tries to warn the others of his village. But these undead spring quickly toward him like the monstrous predatory creatures they are, sleek and strong—shape-shifting demonic beings whose sole purpose is to rise from their own rot and destroy the living.

The old man cries out once but no more for they are chewing through his throat, ripping his poor flesh to shreds.

Great thick torrents of blood pour forth, appearing black in the eerie glow of a jaundiced moon.
Others begin to come forth too each rising armed with killing weapons, weapons alas not used in battle.

For you see these undead beasts were not warriors, but ran from battle in fright. And for their shame they were disowned and damned, their punishment was to be run through with blunt swords.

Yet though their executioners have long since died, these creatures have returned for revenge for they are mindless killing creatures and nothing more.

The village yonder is their target. For this was home to their punishers, those people who deemed them cowards.

They move en masse, a frightening sight to behold.

A courting couple see them and try to flee, but are soon overpowered. Each is pulled away, to be devoured, while still living.

Their agonized cries fill the night sky—and as their blood pours from their torn flesh, it is also consumed for it is the elixir the Draugr needs.

And then suddenly, in between the scream of a howling wind and the cry of an owl the boy and girl are fully consumed. Bones crunch and flesh is ripped apart. Then when they are dead, their mutilated remains are discarded for these undead feed only upon living flesh.

These ravenous dead at last reach the town. Parents cry out as they try to protect their young but none is a match for these demonic creatures. Babies are torn asunder and devoured, children drained and their parents too. All are feasted upon. A great and frightening cry of joy goes up when a pregnant woman is ripped apart, for there is the prize of a tiny fetus within.

The husband, father to the unborn child, watches powerlessly as his family’s murderers finish consuming his loved ones.

He cries out their names until his own head is torn from his body and the cascading blood is drunk.
Each house is so attacked and its inhabitants butchered and eaten.

But there is one who has fled not in cowardice but has rushed to stop these undead monsters.
A young warrior, strong and fiercely built does finally gather some of his friends to fight these cursed beings.

They have gathered iron swords from the monsters’ own crypts for that is the way. They are seen by the demons and are soon trapped high atop the cliffs that overlook the sea. But it is alright, they are ready for battle.

They yell a defiant war cry, as they spring forward, tackling the Draugr and slicing their heads from their bodies.

When all are so attacked the young warriors make a great pyre and burn the damned to ashes. At first light they will consign the ashes to the sea for that is the way it must be done.
The village is no more, but the Draugrs have been destroyed.

Ah but sadly there was one who watched and waited--one who will soon carry forth the hellish curse, for he will gather up as many fiendish comrades as he can from far afield, to avenge his brethren’s destruction.

Go forth if you dare! See if he can be stopped and please try to warn your kin!
And if some night you see them making for your village be resigned to the terrible death that comes from those they call the evil Draugr, the ravenous undead!
**
The Draugr are the shape-shifting undead Vikings of Norse mythology who feed upon living flesh.
In life they dishonoured themselves and were declared unfit to enter Valhalla and were thus buried and forgotten.


They can only be destroyed by decapitation and burning and having their ashes scattered.

“Carole Gill’s talent is a wonder to experience. She has the uncanny ability to craft horrors imbued in fairy tale finesse.”

“House of Horrors is a fine addition to my Kindle, and I’m sure I’ll be going to read this again and again…”

“If you are a fan of horror, you won't want to miss this one!! High marks to Ms. Gill.”

“There are so many different monsters in this book that no matter what your biggest fear is, or your favorite one to read about, you are gonna find it without fail!” 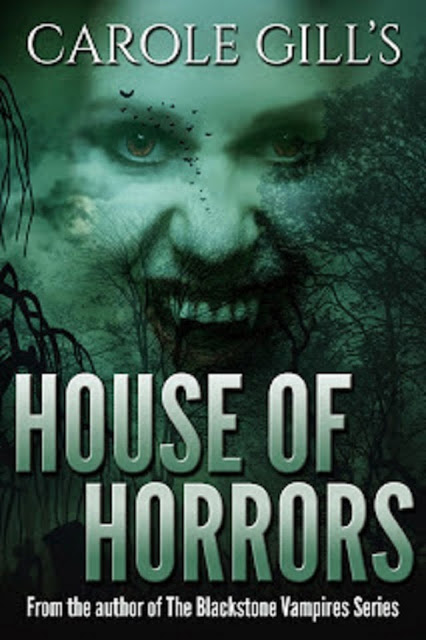