Free Story! WHAT IF NORMAN BATES OPENED A BED AND BREAKFAST? 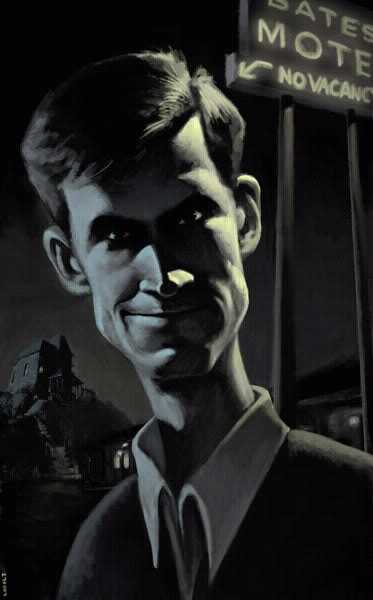 Imagine if you will this scenario: Norman decides to advertise the motel. Yes, the highway no longer runs past the place, that's what decides him as well as a guest telling him about the benefits of advertising.

Norman was entranced with him.

"Sure fella, I can get this place noticed. I can give you prices for air time. And you and your mom can choose which suits."

"Mother won't like it. She doesn't like radio or tv. she prefers to read. In fact, she likes me to read to her!"

"I thought I heard something sounding like that when I pulled up."

"Tell you what, I'll come back next week with prices and a plan. Different packages that I can offer you, how's that sound?"

Norman watched him drive off and then went to tell his mother. He ran too, he was so excited.

The salesman was disappointed when Norman told him his mother thought it all too expensive.

Never at a loss, the salesman made a suggestion: "How about something cheaper that will bring in more guests! Ever think about a bed and breakfast? Does your Ma cook?"

Norman shook his head sadly, "No she’s ill. But I do. Mother loves my cooking. She says it’s for folks with wide-ranging tastes."

"Oh yes, it seems to complete me. See, the taxidermy wasn’t enough. Well, it was and is because I still do it, but I learned to make use of everything. It saves on our food bill."

Between what Bates said and his tone of voice and creepy smile, the salesman started to sweat big time. Norman noticed. “You feel okay? You could lie down if you like, heck you could even take a shower. No charge!"

Nervous laugh and the guy said something about running late.

Norman smiled. “Of course, but I hope you come back. I am very interested in this project. I like the idea of a bed and breakfast. I'm sure Mother will like it too!"

"Sure kid, sure. Well, see you next time with more information!"

Norman stood watching the man get into his car. He chuckled when he heard the scream. It wasn't unexpected as Mother was in the back. And though the salesman's screams were deafening, Mother said nothing. She was too polite.

As for the advertising, Norman did go for it. He had flyers made up with room rates and information as to what was on the menu, well sort of.

He found it all a great idea, efficient and practical. And fun too. He popped another candy in his mouth and smiled. Better clean up, and get the extra food in the freezer. It was good to have a deep freeze. He was glad he talked Mother into buying one and only last week too. What a coincidence!